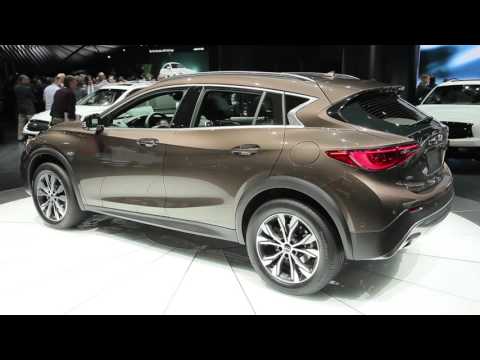 Infiniti has been on a new-car binge. Just last week we had our first drive in the new Q30 hatchback, and earlier this year we saw the concept version of its crossover cousin.
Now, at the Los Angeles Auto Show, Infiniti's given us a first look at that hatchback SUV—the 2017 Infiniti QX30.
It was just a few years ago when Infiniti's parent company Nissan inked a product-sharing deal with Mercedes-Benz. The QX30 is one of the first vehicles to come out of that relationship--it's essentially a restyled and retuned version of the popular Mercedes-Benz GLA hatchback SUV.

As such, the design looks vaguely familiar, but it's attractive in some ways the GLA is not. It has a more interesting front-end treatment, with more fluid lines that drape a little more artfully toward the tailgate. It's pitched as a coupe-like crossover, so the QX30 also gets big wheels and some lower body cladding. But the SUV-ish pieces are bare hints--if anything, the QX30 looks like an even more daring Mazda 3.

Inside, the cockpit gets some distance from the one in the Benz GLA, with a wavy theme rendered in contrasting colors to create a sense of motion. Infiniti's added more sound insulation, and makes the cloth seats in leather on upper trim levels. It's an elegant place to play--and to figure out Infiniti's InTouch infotainment system. In the QX30, the seven-inch touchscreen drives some functions, while others can be controlled with voice commands.

Infiniti hasn't confirmed powertrain specifics, but we expect the engine in U.S. versions to be the same turbocharged 2.0-liter four-cylinder in the Infiniti Q30 and the Benz GLA and CLA. In those cars it's rated at up to 208 horsepower. Power is sent through a seven-speed dual-clutch transmission to all four wheels via a standard all-wheel-drive system.

Other tech features include electronic monitoring systems, a surround view camera and a parking assistant.

The QX30 goes on sale in American in the second quarter of 2016 as a 2017 model. It'll be built at Nissan's assembly plant in the United Kingdom, alongside the Q30 sedan.