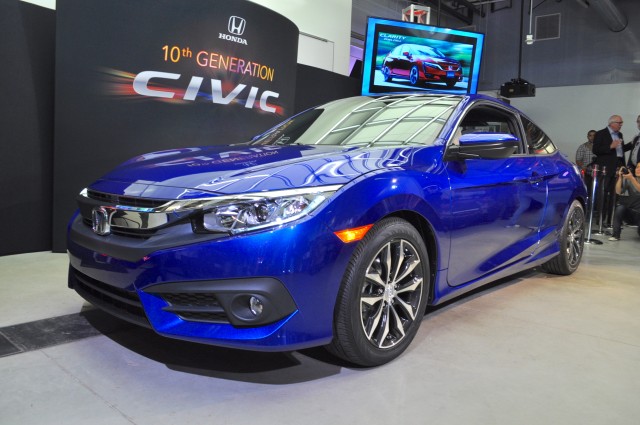 The new 10th-generation Honda Civic sedan just went on sale a few weeks ago, and now it's time for the rest of the lineup to roll.

The new Civic Coupe is much sleeker and sportier than the previous version, with a long roofline like its four-door counterpart. It's longer, wider, and has shorter overhangs than the prior two-door Civic.

But it's really the rear end that stands out, with its wild, concept-car-like taillights.

Inside, the Civic Coupe is nearly the same as the sedan, with a neatly organized dash with lots of soft-touch materials and high-grade finishes. Some models feature a LCD screen in the gauge cluster, and all Civics now have a touchscreen infotainment system.

Like the sedan, the Civic Coupe will be offered with a 2.0-liter four with 158 horsepower. The step-up engine is a turbocharged 1.5-liter four with 174 horsepower. No matter which one is installed, power is sent to the front wheels through a continuously variable transmission. Yes, there's a manual transmission--but to #GiveAShift you have to be willing to live with the base four-cylinder. The Civic Si can't come soon enough.

The Civic's stepped up its safety game in the sedan, and those same features are available in the coupe, include blind-spot monitors and forward-collision warnings.

Honda's being coy about pricing, but the new Honda Civic Coupe will go on sale in March of 2016. Stay tuned for more information and our first drive.