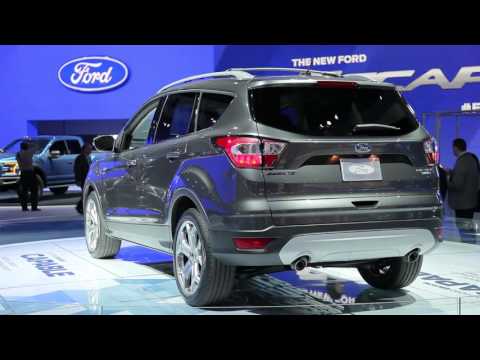 The Ford Escape is one of the best-selling crossover SUVs, and one of the best handling utility vehicles, too. It's due this year for a mid-life refresh--and that updated crossover was introduced at the LA Auto Show before it goes on sale next year.

The 2017 Ford Escape's good looks are still in evidence for the new model year, but there are some changes. The front and rear ends have been restyled--and in front, the new grille makes the Escape look more like the mid-size Edge. The interior's been touched up with new colors and higher-quality trim, a new steering wheel, new controls and more sound deadening for a quieter ride.

Bigger changes come under the hood, where the Escape has two new engines for the new model year. The base 2.5-liter four-cylinder carries over, but there's a new turbocharged 1.5-liter four-cylinder like the one in the Fusion sedan. Ford hasn't released power figures yet, but it shouldn't be much different from today's 1.6-liter turbo four. At the top of the range, there's a new 2.0-liter turbo four, which should turn in power numbers like the 245 horsepower it puts out in the Edge.

Gas mileage should improve in the turbo engines. Both will come equipped with stop/start standard. And while the Escape's always handled well, the ride's been a little firm--so this year, Ford retuned the suspension for better comfort.
CHECK OUT: 2017 Land Rover Range Rover Evoque Convertible Video Preview
The Escape's safety equipment gets a big tech upgrade. New for 2017 will be available features like forward-collision warnings with automatic braking; adaptive cruise control; and a lane-departure warning system with lane-keeping assist. There's no word on whether Ford's improved the crash structure or whether the Escape will improve on its crash-test scores, which have been below par.
Elsewhere on the tech front, the Escape gets a smartphone app that enables features like remote start, and fast-charging USB ports. There's also a new Sync 3 infotainment system, with much cleaner graphics and quicker operation than the old MyFord Touch system.
There's no word yet on pricing, but the 2017 Ford Escape will hit showrooms in late spring or early summer 2016.