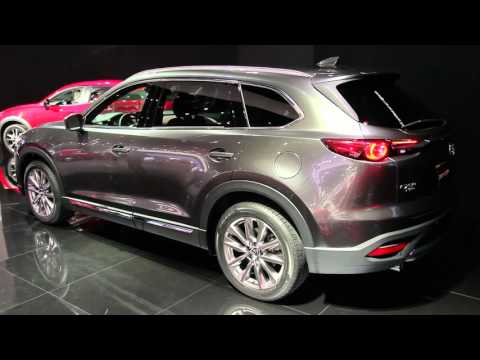 What's a sporty car company like Mazda doing in the three-row SUV business? Maybe they're making big crossovers into something fun to drive?
That's what we're hoping for with the CX-9, the three-row family wagon coming for the 2016 model year.
WATCH: 2017 Cadillac XT5 Video Preview

The CX-9 joined the Mazda lineup in the 2006 model year, and hasn't been changed much since—until now. The new crossover gets its underpinnings from the Mazda 6 sedan, and its styling comes straight from the same pens that brought you the new Miata and Mazda 3. It's one of the more expressive three-row SUVs we can name—its slicked-back greenhouse sits behind a long nose, and the wheels sit close to the corners, for a look that's more grand tourer than family wagon.

MORE: Follow all our 2015 Los Angeles Auto Show coverage
The cockpit is styled in a handsome, clean, and modern way, with touches like rosewood, aluminum, and Nappa leather on the order sheet. Mazda says it's also worked hard to remove noise from the cabin—adding a few dozen pounds of sound deadening while keeping the CX-9 trim. In fact, it's almost 300 pounds lighter than the outgoing car.
In part, that's because it's smaller. The wheelbase is longer by 2.2 inches, but overall length is down 1.2 inches.
CHECK OUT: 2017 Ford Escape Video Preview

Under the hood is the long-awaited Mazda turbocharged four. It's a 2.5-liter engine, with 250 horsepower, coupled to a six-speed automatic and either front- or all-wheel drive. It's an engine we hope will also make an appearance in, well, let's just say every other Mazda in existence today.

Other technologies fitted to the 2016 CX-9 include LED headlights, Mazda Connect infotainment and the i-ActivSense suite of electronic driver aids and safety features.

Pricing hasn't been announced, but the 2016 Mazda CX-9 goes on sale next spring.