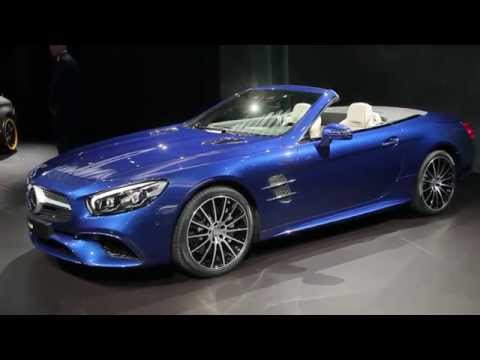 Mercedes has a true sports car in its lineup now with the AMG GT--but for decades, its SL two-seat roadster filled the bill.
This year, the Benz SL is back with some new styling hooks and uprated hardware as it lifts its grand-touring game.
The first thing you'll notice with the new SL is the new front end. Back in 2012, the current SL bowed with a design that, to be generous, was a little disjointed. No more. Designers in Stuttgart have resculpted the front end with some overt AMG GT influences, and it's a much prettier car as a result of its new hood, new LED headlights, and new fascia.
MORE: Follow all our 2015 Los Angeles Auto Show coverage
Under the hood, the new SL offers a choice between four powertrains, starting with the new base engine in the SL450, a twin-turbo V-6 with 362 horsepower, up 34 from last year. The SL550 returns with its 449-horsepower, twin-turbo V-8. Both adopt a new nine-speed automatic transmission, as well as driver-selectable modes for throttle response, transmission shifts, suspension firmness and steering weight. There's also an active suspension that damps and firms itself as it bends into corners--like a skier, Mercedes says.
Of course, you might want to skip right over to the AMG versions. The SL63 brings it with a 577-horsepower, twin-turbo V-8--but the SL65 delivers 621 horsepower with its twin-turbo V-12. Both carry on with a seven-speed automatic transmission. Zero to 60 times for the SL lineup range from five seconds to about four seconds; top speed is capped at either 155 or 186 miles per hour.
CHECK OUT: 2017 Fiat 124 Spider Video Preview
Some nice touches round out the SL's 2017 updates. The roof now powers up and down at speeds of up to 25 miles per hour, and the divider that separates roof space from trunk cargo space powers itself into place. Apple CarPlay and USB ports make their inaugural appearance in the new SL, too.
We don't have pricing details yet, but the new 2017 Benz SL goes on sale in the spring of 2016. Stay tuned with us for a first drive.
________________________________