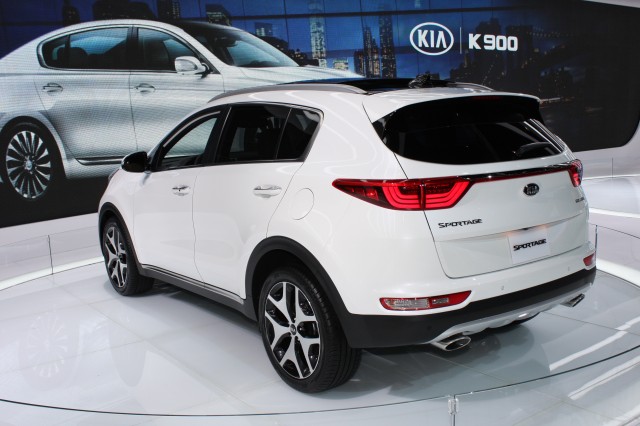 Hatchback, crossover, or SUV? Whatever you might call the Kia Sportage, you can add "all-new" this year.

The Sportage has looked more like a sporty hatchback than an SUV, and the athletic look adds more muscle in the new model. The front end is taller, with bigger air intakes and a more sculpted body--like it's been powerlifting.

Inside, the Sportage has a two-tier dash. The top level houses the gauges and the touchscreen. Below the beltline, there are big controls for climate, audio, and other secondary controls. The interior has more soft-touch surfaces, and some models get glossy black trim, stitching on the dash, and paddle shift controls.

With either of the Sportage's four-cylinder engines, you'll get a six-speed automatic transmission. But one of those engines has a far bigger punch. The base engine's a 181-horsepower 2.4-liter four, but it taps out in favor of a turbocharged 2.0-liter, 241-horsepower four in the Sportage SX.

All-wheel drive with a locking center differential is an option on every Sportage trim level.

There's a little more room in this new Sportage. The wheelbase is up 1.2 inches, and overall length has grown by 1.6 inches. Rear-seat space has been improved, and so has cargo space, which adds an available hands-free power tailgate.

Kia is aiming for top crash-test scores, and the new Sportage will offer available blind-spot monitors, forward-collision warnings with automatic braking, and a rearview camera.

Finally, a new infotainment system adds new telematics features to go with standard Bluetooth audio streaming, Apple CarPlay and Android Auto. They're all smartphone-driven, and they're free on EX and SX Sportages.

Pricing hasn't been announced, but the new Sportage goes on sale early next year.