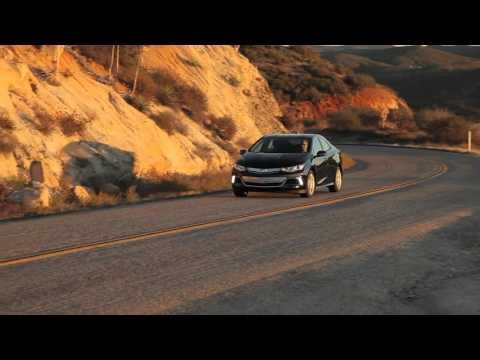 It's only in its second generation, but it's fair to say the Chevy Volt is one of the most important vehicles ever built in America.

Now it's time for Volt 2.0, and it's better in every way. Will that be enough to keep eco-friendly drivers steering in the direction of Chevy showrooms?

We get some answers in our video road test of the 2016 Chevrolet Volt.

The 2011 Volt was GM's first extended-range electric vehicle--and despite bankruptcy, politics, and low gas prices, it was a success. It won several Car of the Year awards for its cutting-edge green drivetrain--part electric, part gasoline, a Space Shuttle in terms of engineering complexity.

The 2016 Volt stays true to the original concept, but it also fixes most of the shortcomings of the original. All-electric range is up from 37 miles to 53 miles, and overall fuel efficiency is up to 42 miles per gallon combined. It's quieter, handles better--and it's even less expensive, by a little bit.

At a glance, the new Volt's also a much better-looking car. It's very much in line with the current Chevy lineup, with a more rakish profile and crisper lines. It's still a five-door hatchback, but the dash is lower and the sides are more sculpted, so it looks leaner and prettier.

If there's one criticism, it's that the new Volt looks too similar to the new Chevy Cruze: same size, same shape, some of the same design cues.

Inside, Chevy's cleaned up the driving interface--the irritating touch-sensitive switches are gone, and the more conventional controls make for a more intuitive driving experience.

With the new Volt, Chevy's put lots of effort into making the Volt a better, more efficient performer. It's faster, has more electric range and higher gas mileage--but it's also quieter and sticks to the road better.

The powertrain's completely new. The 2016 Volt combines a 101-horsepower, 1.5-liter four-cylinder gas engine with twin motor-generators that combine for about 149 horsepower and 294 pound-feet of torque. The motors can power the front wheels together, or one motor to drive the car while the other recharges the battery. The seamlessly smooth drivetrain and a curb weight about 200 pounds lower let the Volt accelerate to 60 miles per hour in about eight seconds, down from about nine seconds.

Plug-in fans will love the Volt's EPA numbers, too. At 53 miles of electric range, it's about one-third better than the prior Volt, and its efficiency rating of 106 MPGe is close to that of some battery-electric vehicles. Chevy says about 90 percent of all trips can be completed on battery power alone, a big milestone.

Inside, the Volt's made smaller gains. Interior space isn't much bigger, but comfort is up, and the cabin's better-finished than before. It can carry four adults in comfort, but the fifth seating position on the back bench is for emergencies only, since it straddles the battery pack.

The 2016 Chevy Volt hasn't been crash-tested yet, but we expect great things, based on the last Volt's excellent safety scores. A rearview camera and ten airbags are standard on the new Volt, and options include forward-collision warnings with automatic braking, blind-spot monitors, and automatic parking assistance.

Prices for the Volt start at $33,995 before federal and local tax incentives. Every 2016 Volt comes standard with power features, automatic climate control, keyless access and ignition, three free years of OnStar, 4G LTE connectivity and three months of data services, and Apple CarPlay built into its touchscreen. Android Auto? It's on the way, we hear.

So what's the bottom line with the 2016 Chevrolet Volt? It really offers the best of both worlds: a nearly pure electric driving experience, without the worry of running out of juice.