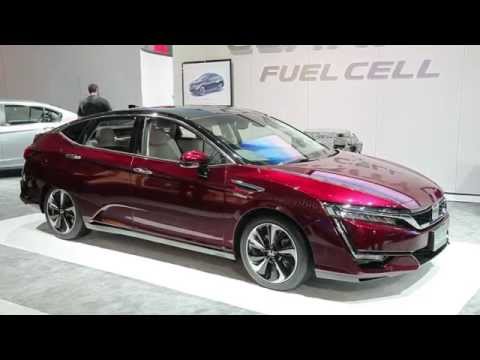 ​
Will hydrogen really be the fuel of the future? Honda thinks it might, so it's putting down some serious money to develop its second fuel-cell powered production car--but it's also hedging its bets for electric cars and plug-in hybrids at the same time.
We got our first look at the Clarity at last month's Tokyo motor show, and nothing's changed since. The Clarity is a five-seat, four-door sedan that's a lightly reskinned version of the fuel-cell-powered concept cars that Honda has been showing for a couple of years.
MORE: Follow all our 2015 Los Angeles Auto Show coverage
It's a radical shape, and like that of the Toyota Mirai, it's not exactly pretty. But pretty isn't what it's about--the Clarity is about radical green change.
Under the hood, the Clarity packs in the technology that will deliver the clean driving of the future, Honda says. There's an electric motor rated at 174 horsepower and 221 pound-feet of torque, paired to a fuel-cell stack that delivers the electricity. The entire powertrain is small enough to fit under the hood, a big advance from previous fuel-cell concepts.
Honda stores the Clarity's hydrogen in tanks stowed under the rear seat, ahead of the rear wheels. Lithium-ion batteries for electric storage sit in the floor as well.
WATCH: 2017 Fiat 124 Spider Video Preview
With this powertrain, Honda says the Clarity can accelerate to 60 mph in about nine seonds. It can also drive up to 434 miles on a full load of hydrogen--at least, by Japanese-market testing standards. Those figures still could translate to more than 300 miles of driving on the EPA cycle.
The Clarity's story doesn't end with fuel cells, though. Fuel-cell propulsion remains expensive and is almost completely lacking in infrastructure in the U.S. So while the Clarity might make sense as a fuel-cell vehicle in Japan, Honda isn't limiting itself to fuel cells. The Clarity's platform has been designed for other uses--namely, versions with plug-in hybrid and battery-electric propulsion to come sometime after 2017.
________________________________