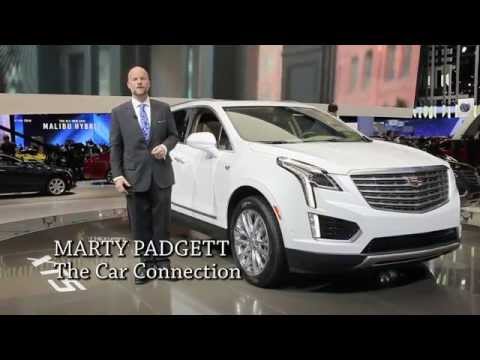 Cadillac wants to take over the luxury world, but it's missing a truly great crossover SUV in its lineup. Well now, It's time to forget the lackluster SRX because at the LA Auto Show, Cadillac has unveiled its new 2017 Cadillac XT5.
The XT5 goes for drama with its crisply folded body. With Le Mans-style LED lighting and dramatic angles down the sides, this SUV is taking Cadillac's design language to new extremes.
The cockpit's infused with gentle curves that frame a touchscreen interface. Cut-and-sewn leather is paired with a choice of wood trim, aluminum, or carbon fiber.
MORE: Follow all our 2015 Los Angeles Auto Show coverage
The new XT5 seats five, but it's bigger and lighter than the SRX. Rear leg room is up 3 inches, and the rear seat slides and reclines. The XT5 weighs almost 300 pounds less than the SRX, too.
While the rest of the world gets a turbo-four engine, the American versions of the XT5 will draw power from a 310-horsepower, 3.6-liter V-6. An eight-speed automatic handles the shifting.
The XT5 is front-wheel drive, except when it's not--all-wheel drive will be an option. As for handling, a strut and multi-link suspension and 18-inch wheels are standard; 20-inchers and adaptive dampers are available.
CHECK OUT: 2017 Land Rover Range Rover Evoque Convertible Video Preview
On the features list, the XT5 sports a system that displays output from a rear-mounted camera on the rearview mirror for much better vision. A color head-up display is available, as are surround-view cameras.
Other safety features include forward-collision warnings with automatic braking; blind-spot monitors; adaptive cruise control; and automatic parking assistance. Along with the usual standard power features, the XT5 will also offer wireless phone charging, 4G LTE connectivity, Apple CarPlay, and Android Auto. LED headlamps and a gesture-controlled power tailgate will be offered.
Pricing hasn't been announced, but the XT5 will go on sale early in 2016.