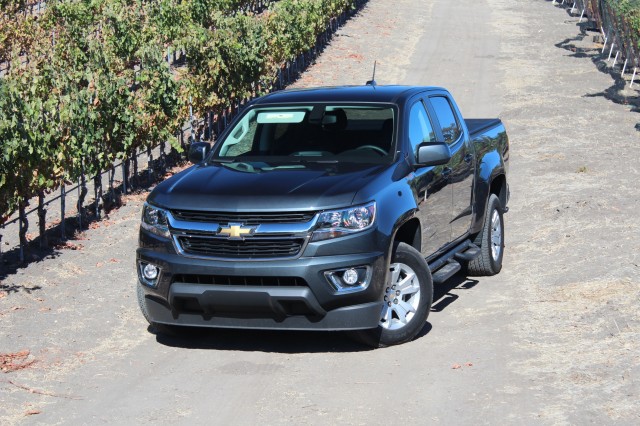 If you’re one of those guys who’s a little turned off by ever more cumbersome, oversized full-size trucks, the 2016 Chevrolet Colorado Diesel, at least at first glance, looks like the sensible truck that puts a stop to the insanity.

It’s easy to see why for some people, today’s full-size trucks don’t make the functional cut. We’re a bit horrified at the size and stature of today’s normal full-size trucks; with cabs that require running boards to get into, and front ends seemingly modeled after that of semis, they’re behemoths that have trouble fitting into many cities and suburbs—or even along a forested two-track.

And there are a lot of conflicting priorities facing truck shoppers. You want towing and hauling capability, yet a pleasant ride, good interior comfort, and decent fuel efficiency. With the 2.8-liter Duramax turbo-diesel engine that’s newly available for 2016, many of those conflicts get quashed—up to 7,700 pounds trailering; officially more than 30 mpg on the highway, GM promises; and the refined ride, easier maneuverability, and delightful cabin appointments we’ve come to appreciate from the Colorado since it was fully redesigned last year.

In its previous generation, the Colorado was offered with a V-8, and the new Duramax diesel effectively replaces that engine’s position as the towing workhorse of the lineup—just with half the cylinders. The four-cylinder turbo-diesel makes just 181 horsepower, yet it muscles out 369 pound-feet of torque at 2,000 rpm.

The 2.8-liter Duramax has an iron block and aluminum cylinder head, with a forged steel crankshaft and connecting rods. There are also piston-cooling oil jets, and an oiling circuit that’s dedicated to the turbocharger. There are ceramic glow plugs for quick cold starting, while a balance shaft has been redesigned for even smoother operation and a laminated-steel oil pan aids engine smoothness and quietness. It’s all aided, too, by a special damping system that uses secondary spring masses.

Unruly edge? Forget about it.

It’s near impossible to find an unruly edge here. Furthermore, the 6L50 six-speed automatic that the diesel is paired with (also with a 3.42 rear axle ratio) handles this engine perfectly, again with a level of refinement to the shifts and to low-speed creep that wouldn’t be out of place in a luxury truck. Wind this engine much past the 3,500-rpm range, where its torque plateau starts to drop off, and the Colorado surges gracefully forward with each upshift, as you drop right back on that wave of torque. And while there’s just a bit of a delay if you step onto the gas, waiting for the big turbo to spool up, the torque comes on in a way that rarely requires a downshift.

Diesel trucks have historically brought a louder, somewhat more vibration-intensive experience to the cabin. But that’s not the case here. Yes, it’s a little louder from the outside than its gasoline counterparts; yet from the driver’s seat, the diesel four is surprisingly refined, and so smooth (and mostly free of the clatter and detonation sounds) that it wouldn’t be out of place in a luxury-badged vehicle. It also seems more hushed and removed from the cabin than the 2.2-liter in the Chevy Cruze Diesel passenger car.

We even think it’s quieter from inside the cabin than the turbo-diesel V-6 in the Jeep Grand Cherokee and Dodge Ram 1500.

The engine was conceived from the start to be part of the global Colorado truck family, although GM has introduced a series of revisions aimed at making it a lot smoother and quieter from the cabin—as well as entirely up to the task in U.S. driving conditions. The special balance-shaft setup engineered for the U.S. market helps, plus a laminated-steel oil pan for more rigidity. Versus the international version of this engine, Chevy has also subbed in different tuning for the high-pressure common-rail direct-injection fuel system.

Global, but smoothed-over for the U.S. on multiple levels

Emissions-wise, GM says that the Duramax 2.8 is the cleanest truck engine that the automaker has ever produced. And anecdotally, we couldn’t detect even a whiff of diesel odor (although full admission, GM warmed the Colorado Diesels up for us and we’re still curious about the always-noisier cold start).

A cooled exhaust gas recirculation (EGR) system helps keep tailpipe emissions clean, as does a selective catalytic reduction (SCR) system that feeds a urea (also called diesel exhaust fluid, or DEF) solution into the exhaust stream at a regular interval. Officials said that this fluid should only need to be topped off with each oil-change service, although towing and high-speed, high-load use will use the urea at a faster rate.

We got great mileage, too. Over a 42-mile driving loop, consisting of two-lane country roads, a short stretch of curvy canyon road, and a short freeway stint, with two different drivers driving mindfully with the flow of traffic, we averaged about 31 mpg with a 2WD Crew Cab Colorado Diesel (the lightest, most effieicnt guise for this powertrain, as standard cabs aren’t offered).

The Duramax diesel is even good for b20 biodiesel (a blend of 20 percent biodiesel, 80 percent fossil-fuel-derived diesel).

The Dodge Ram 1500 EcoDiesel gets an EPA-rated 21 mpg city, 29 highway, and 24 mpg combined—and we’ve done somewhat better than that combined figure in real-world driving with the Ram.

We didn’t get a chance to tow with the Colorado Diesel, but the capability is there in full force—with up to 7,700 pounds, including a tow/haul mode and auto grade braking.

There actually is a diesel brake controller (and button) for the Colorado Diesel, but it’s soft to engage; however the the exhaust brake works with the cruise control to help maintain vehicle speed while also keeping things smooth and quiet inside the cabin.

Gasoline-engine Colorado models can be had in Extended Cab or Crew Cab versions, while the new Diesel is only offered in Crew Cab form (you can choose between two different box lengths, though).

Ultimately, though, the Colorado doesn't quite live up to its tease of offering easier maneuverability. The Colorado is definitely not as wide and cumbersome as a full-size truck—at least than the full-size truck that most people order—but it’s worth considering that the short-bed Colorado Diesel Crew Cab, the tidiest package offered in the lineup, is actually longer than a regular-cab Ram 1500.

DON'T MISS: Survey: Over Half Of Indie Garage Owners Want To Sell Or Close Their Shops By 2020

Keep in mind that you get the same great features and interior appointments as with the rest of the Colorado lineup here—including warm, soft-touch materials for much of the cabin, and excellent touch-screen infotainment. The driving position is quite good, ride quality was surprisingly pleasant, and the front seats themselves are far better than what you’ll find in either the new 2016 Toyota Tacoma or Nissan Frontier.

Colorado Diesel models start at about $31,090 in base Work Truck form, up to around $40k in the form we recently saw and tested. Depending on how you look at it that's about $10k more than the entry model of the Colorado, with the base four-cylinder engine, or about $6k over the base V-6 Colorado WT.

Would we choose the Colorado Diesel, which is due to go on sale late this year, over the V-6? In an instant, yes. If you plan to almost never carry a load, and you’re using the Colorado mainly for commuting and some light weekend hauling, go with the basic four-cylinder model; but for heavier towing and hauling needs, splurge a little bit and this stocky-yet-fuel-efficient diesel can’t be beat.