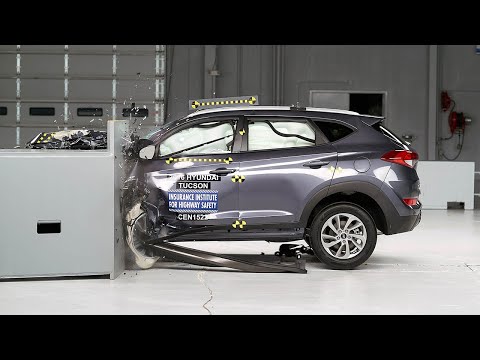 The Tucson, which was fully redesigned for 2016, and which we just covered in a video road test, earns top ‘good’ results in every category (and subcategory) of testing, including the typically tougher small overlap category.

Automatic braking, and it works

With the newly available Forward Collision Warning system with Autonomous Emergency Braking, the 2016 Tucson earns a ‘superior’ rating for front crash prevention from the IIHS; it earned a top six-point score from the safety agency, as it was able to fully avoid a collision both at 12 mph and 25 mph.

The 2016 Hyundai Sonata (applying also to the Sonata Hybrid) doesn’t get quite the perfect scores earned by the Tucson (it renews its 2015 crash ratings, which are all ‘good,’ except for an ‘acceptable’ score in small overlap frontal protection), but it shares that new top rating in front crash prevention—earning both models a spot on the 2015 Top Safety Pick+ list.

Top Safety Pick+ has a price

There’s one big asterisk to this one, though: In both cases, you’ll need to spring for a Sonata or Tucson that bears a sticker price above the $30k mark if you want those active-safety items—for models that, in both cases, start in the low twenties.

That active-safety kit is only offered as part of the $1,750 Ultimate Package. In the Sonata, it’s only available on the Sonata if you also add the $3,100 Tech Package—bringing the bottom-line price to $33,035 for a Sonata Limited, for example (and a bit more if you choose the quicker 2.0T version). And in the Tucson, it’s a $2,750 package on the top-tier Limited model, bringing the bottom line up to $30,795.

While we applaud the availability of those features, we hope it’s on the way in more affordable models soon. Subaru, for instance, has been offering its EyeSight system on its mid- and upper-trim versions of most models for a relatively low price for several model years; and Toyota plans to roll out an inexpensive, widely available version of frontal collision warning with autonomous braking on most models by the end of 2017.