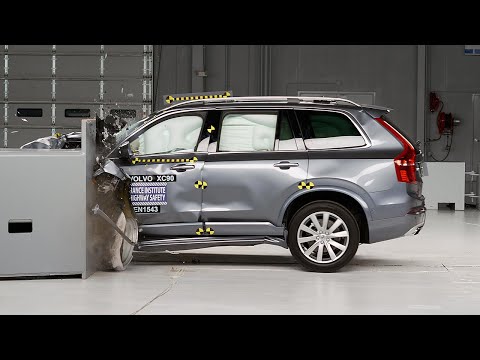 “Swedish safety” has become a bit of a tautology when it comes to vehicles. Whether you’re talking about Volvo, or its now defunct cross-country rival brand, Saab, Swedish-engineered cars, wagons, and crossovers have long set a standard for occupant protection.

And so it goes with the all-new 2016 Volvo XC90, a model that’s almost entirely designed, engineered, and built in Sweden—despite Volvo’s ownership today by China’s Zhejiang Geely Holding Group. Once again, the XC90 has proven its safety, with a Top Safety Pick+ rating from the Insurance Institute for Highway Safety (IIHS).

Stellar ratings in nearly all areas of protection

The IIHS also commends the upgraded City Safety system in the XC90, which now functions at higher speeds. It earned the maximum six points in the IIHS front crash prevention test, completely avoiding collisions at 12-mph and 25-mph test speeds.

There have been a lot of spectacular fails by Chinese-brand cars—including those from Geely—in the not-too-distant past. A Geely CK1 tested by the international NCAP organization in 2010 earned a zero-star rating, with driver protection deemed “poor for most body regions.”

Analysts had pointed to Volvo’s safety-engineering expertise as one of the reasons the Swedish automaker looked so attractive to the Chinese automaker. It’s now clear that Volvo, free once again of its Ford ties, hasn’t lost its touch in engineering a safe structure and passenger cell; and it’s surely showing its parent company a lesson or two.

There’s a new generation of vehicles to be built on this so-called sclable product architecture (SPA) that underpins the latest XC90; that’s a good sign for the all-new S90 flagship sedan due to be revealed at next January’s Detroit Auto Show, and slated to go on sale in time for the 2017 model year.

The new XC90 hasn’t yet been tested in the U.S. federal government’s New Car Assessment Program (NCAP); ratings for the outgoing model hadn’t been updated either, since those ratings were significantly restructured for the 2011 model year.