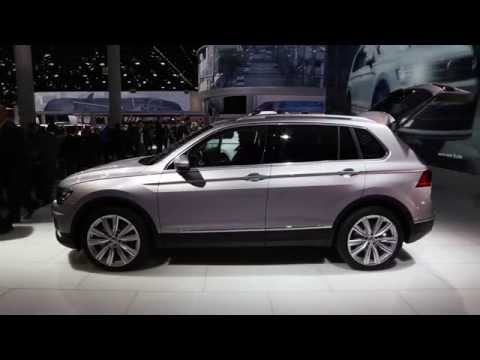 Small SUVs are big business in America, but for Volkswagen there's a lot of room to grow. The current VW Tiguan hasn't been a big seller--but with a new version, all that could change.

When it shows up in the U.S. The Tiguan will have grown a little bit; it could even sport a third-row seat. But the design and technology won't change much from the version shown to European shoppers at Frankfurt.

The new Tiguan is from the same family of cars as the latest Golf. It's a little bigger than the current crossover--a little longer, lower, and wider.

This time around the Tiguan wears a tougher, more rugged look--a little more like a traditional SUV. There's an R-Line package with its own front end and 20-inch wheels.

Inside, the layout is like that of the Golf. But the Tiguan gets a 12.3-inch digital gauge display with five different themes. The dash flows into another touchscreen devoted to infotainment.

We expect the standard powertrain will be VW's turbocharged 2.0-liter four with a dual-clutch transmission--but we also expect a turbodiesel to join the lineup for the first time. All-wheel drive will be an option.

Another intriguing option could be a plug-in hybrid drivetrain, one with a 1.4-liter turbo four combined with an electric motor and batteries as well as a dual-clutch transmission.