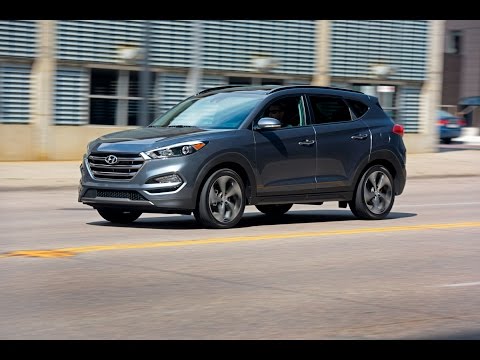 Crossover SUVs are some of the most popular new cars on the road today--and the competition is brutal. From the Honda CR-V to the Ford Escape to the Nissan Rogue, there are plenty of excellent choices at the smaller end of the sport-ute spectrum.

This year, you can add the Hyundai Tucson to the list. It's new for 2016, with a fresh design, new powertrains, and new technology. The question is, are those changes enough to push those other SUVs down on your shopping list?

When it comes to styling, the Tucson is a winner. It swaps out the last edition's economy-car looks for an upscale, sculpted presence. From its hexagonal grille and angular headlights, to its strong character lines, it's a junior Santa Fe Sport--which is to say, very good-looking.

Inside the upscale feel continues with a simple, well-finished design with thoughtfully laid out controls. The analog gauges and the digital information center are straightforward and easy to read--they're refreshingly free of gimmicky graphics.

The front seats are well-bolstered and comfortable on longer drives. Move to the back seat and two adults will be comfortable. While this reclining function in the rear seat is nice, it's more a necessity. It basically tilts the seat from nearly vertical to what we consider a normal angle.

Tucson buyers choose between two powertrains: The base model has a 2.0-liter four-cylinder rated at 164 horsepower and shifts with a six-speed automatic transmission. All other models use a 1.6-liter turbocharged four with 175 horsepower, connected to a seven-speed dual-clutch transmission. Power is sent to the front wheels, but all-wheel drive is an option.

Fuel economy rings in as high as 33 mpg highway according to the EPA.

How does it perform? We’ve been somewhat disappointed with the smoothness of the the turbo four. It can feel slow to respond under hard acceleration, no matter which driving mode you've chosen. The base 2.0-liter has slightly less power and torque, but it feels more awake around town, particularly when it's dialed into Sport mode.

Handling is predictable and safe rather than sporty. The Tucson has a refined ride, maybe its best performance feature, unless you opt into the big 19-inch wheels. The steering feels quick, and it's quiet at highway speeds. In all, the Tucson delivers exactly what most crossover drivers want behind the wheel.

The Tucson hasn’t been crash-tested yet but Hyundai has engineered it with top scores in mind. It's available with forward-collision warnings and automatic braking; so are a lane-departure warning system and blind-spot monitors.

Starting from about $23,000 the Tucson comes nicely equipped with a tilt-and-telescope steering wheel, automatic headlights, and a rearview camera. Notable options include an 8-inch touchscreen navigation system, HID headlights, and a panoramic sunroof.

So what’s the bottom line with the 2016 Hyundai Tucson? It caters to drivers that put styling and features at the top of their crossover-SUV wish list.

For more information be sure to read our full review of the 2016 Hyundai Tucson here.