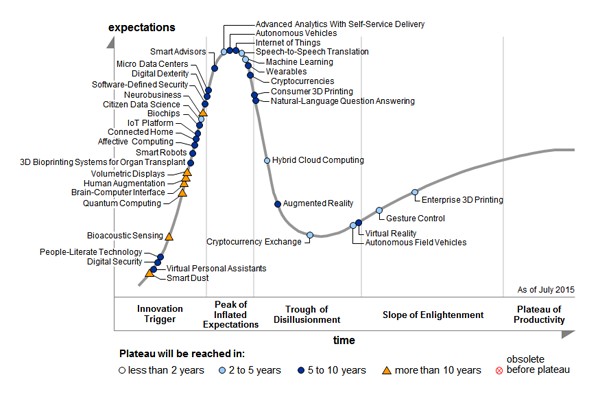 Auto enthusiasts and analysts have been debating autonomous cars for years. Some critics think they're decades away from becoming a reality, and at least one survey has shown that a majority of motorists don't want to be anywhere near them (despite the fact that autonomous cars are better drivers).

On the other hand, as J.D. Power demonstrated yesterday, drivers are interested in autonomous features like lane keeping assist and adaptive cruise control, even though they may not want to take their hands off the wheel. And today, a study from the IT analysts at Gartner shows that autonomous vehicle technology could be poised for mainstream acceptance in about five years.

Gartner's approach is unique, in that it's based on something that the firm calls the "hype cycle". Over the years, Gartner has learned to gauge the rhythm of buzz surrounding new technologies, and the company can predict when they'll reach mainstream status.

The pattern is fairly standard. First, a new technology emerges, and everyone becomes excited by the possibilities it offers. Enthusiasm ramps up and up until it reaches what Gartner calls the "peak of inflated expectations". Afterward, there's a period of disillusionment, when the public realizes, "Oh, maybe this technology isn't everything we thought it was", and buzz dies down. Eventually, however, expectations realign, and the public understands the true, uninflated promise of the technology, when then moves into mainstream products.,

As you can see from the chart above, Gartner says that wearable technology has begun its downward slide. We've all begun to realize that devices like the FitBit aren't going to make our lives better overnight, but according to Gartner, within the next five or ten years, we'll accept the technology's value, along with its limitations, and it'll see widespread adoption. The "Internet of Things" (e.g. lightbulbs and refrigerators you can access via apps) is on a similar trajectory.

Sandwiched between those two technologies are autonomous vehicles. According to Gartner, consumers should warm up to them sometime between 2020 and 2025.

A complementary report from Business Insider predicts that by 2020, about three percent of new cars will be equipped with self-driving technology. However, an additional 65 percent of the 2020 auto market will consist of connected cars -- that is, vehicles that are linked to a network via a cellular or other connection. Every connected car will come with its own slate of offerings and options, but if all goes as planned, most will contain a range of safety features like collision avoidance, vehicle-to-vehicle and vehicle-to-grid communications, and more.

Granted, it's not all good news. These connected cars will also leave drivers exposed to hackers.

Are you looking forward to autonomous cars? If not, are there elements of autonomous car technology, like automated braking, that you want on your next car? Share your thoughts in the comments below.