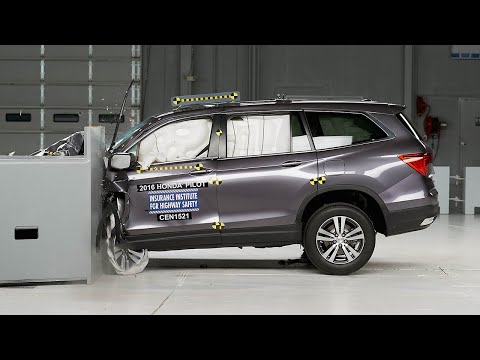 The Insurance Institute for Highway Safety (IIHS) has released crash-test ratings for the 2016 Honda Pilot, and this spacious seven-passenger sport-utility vehicle is already looking like a great pick—as it’s always been—for safety-conscious families.

The Pilot, which has been fully redesigned for the 2016 model year, earns top scores in every single category of testing. That includes top ‘good’ ratings in the small overlap front (seen below), plus the moderate overlap front, side, roof strength, plus head-restraint and seat (rear) categories. It also achieves top scores in every single subcategory of each of those tests—and a stellar 5.46 strength-to-weight ratio in the roof strength category.

The 2016 Pilot achieves its top ratings when optioned with the Collision Mitigation Braking System, which is included as part of the Honda Sensing Package (not available on the base LX, but an extra $1,000 on 2016 Honda Pilot EX and Pilot EX-L models.

These results don’t yet include results from the federal government and its New Car Assessment Program (NCAP) testing regimen. The previous version of the Pilot achieved four out of five stars in that, although it has a great record for real-world occupant protection.