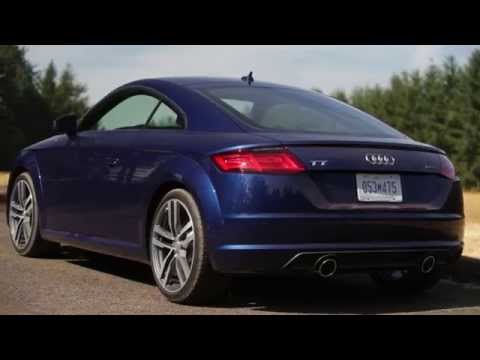 Purely in terms of the sensory experience—provided you keep your driving to normal streets and highways—the 2016 Audi TT feels more like a sports car than it ever has.

The 2.0-liter turbocharged four snarls when you step into it, and burbles with a tease of overrun when you drive it hard; you can fling it around corners quickly, or tackle high-speed sweepers with composure and stability. And with its Audi virtual cockpit layout, at first charm it feels just a bit more like an exotic sports car than it might have a right to.

Oh, the sights and sounds

But seriously, all the sensations, props, and cues are there. You have the trademark rear spoiler that, once you hit 75 mph, automatically strikes its pose for more downforce at speed. There’s a new variable-ratio, variable-assist steering system that makes you feel a little telepathic (provided you’re not pushing your limits). The seating position feels more closely aligned with what the car is doing in corners, and the center of mass feels lower. And then there’s the ‘sound actuator’ that pipes more spirited sounds into the cabin.

The numbers, by the way, are impressive, too. The standard TT can get to 60 mph in 5.3 seconds, and reach a limited top speed of 155 mph.

Up until now, this editor’s experience with the new third-generation TT was limited to an early first drive in Europe, with models that weren’t entirely representative of what we get in the U.S.—or how this new TT would fit in here.

The car we recently spent a couple of days with was fully U.S.-spec, a 2016 TT Coupe optioned with the Technology Package (full MMI navigation, Audi connect services, side assist, a rearview camera and parking sensors), a 19-inch wheel package with summer tires, the S Sport seat package, and glorious Bang & Olufsen sound. Its bottom-line price was $50,600.

First off, we spent several hours cruising on some rather coarse road surfaces, and dearly missed the Audi magnetic ride suspension. In Europe, where we got our first drive last year, that’s a feature that’s available in the TT—and we think it actually fits the TT Coupe’s character best (where it rather dramatically cuts road noise), while the TTS could benefit from feeling a little more directly connected (because the steering itself still doesn’t transmit all that much feel from the road). Unfortunately U.S. buyers apparently don’t see it that way, and we have to wait and see if the TT RS delivers the performance with a more direct driving feel.

In any case, the TT’s powertrain is about perfect for the task. The engine cranks out useful low-end torque well before 2,000 rpm but builds urgency up the rev range in what feels like an even fashion, so there’s more of a sensation of speed as you accelerate. And the S tronic (DSG) gearbox is quick as ever, with its level of quickness determined through the Audi Drive Select modes.

It’s a surprisingly fuel-efficient powertrain, too. Over about 340 miles of higher-speed highway driving, plug just a bit of back-road blasting, I averaged nearly 31 mpg in the TT.

While I didn’t get a lot more time to tap into the capabilities of the virtual cockpit, I did get more comfortable with it—including toggling between its two primary display modes and flipping between displays. Allowing the area between gauges to display such a large amount of high-res map is very cool—although I’m still a little conflicted about how useful it is packaged in a long horizontal orientation when most people like traveling ‘upward’ on the map.

There are also a few situations in which backing out of MMI’s menus within the virtual cockpit, when things go wrong, isn’t immediately obvious. For instance, when I was trying to locate a nearby coffee shop in the POI search, and the voice-search functionality was giving me options for something completely different, I couldn’t find a way to back out just one step and redo the search (I instead resorted to pressing the back button on the MMI controller beside the seat).

Speaking of seats, the TT is superb. I found more than enough legroom for my lanky 6’-6” frame, and those sport seats had great back and thigh support—something you don’t necessarily expect in this type of vehicle. Please, just forget about what's behind the two front seats, though.

For casual drivers who want a sporty coupe or roadster—or a model that really does bring you some spirited sensations—the TT is likely not going to disappoint. While it’s possible that die-hard enthusiasts may get frustrated trying to dissect what the TT delivers, just step back and take a look at it, then cruise around, on public roads for a few hours.

To its essence, the 2016 Audi TT delivers a grin, and the sort of driving enjoyment that doesn’t require a track membership.