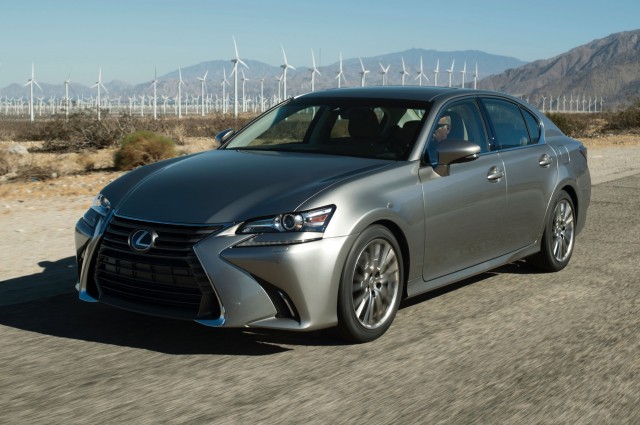 The BMW 5-Series, Audi A6, Jaguar XF, and Cadillac CTS are already among the mid-size, premium-brand sport sedans to offer a turbocharged four-cylinder engine. And now the 2016 Lexus GS joins those leagues.

In the 2016 Lexus GS 200t, a 2.0-liter turbocharged four-cylinder engine makes 241 horsepower and 258 pound-feet of torque; and its mileage ratings should put it back on the consideration list for some more mileage-conscious shoppers.

For now, the GS 200t will only be available in rear-wheel-drive form. It’s fitted only to an eight-speed automatic transmission and, while fuel economy numbers haven’t yet been released, Lexus mentioned an anticipated 33 mpg highway. That will indeed make this a more efficient alternative to the GS 350 (which gets a boost to 311 hp for 2016, by the way)—and likely come within a few mpg of the GS 450h hybrid’s 34-mpg highway rating.

The 2016 Lexus GS 200t also marks the debut of a few other changes for the GS lineup. The Lexus spindle grille has become a little more articulated, giving the car a little more presence from the front, as with the LX. Bi-LED headlamps have been fitted, and rear lamps and bumpers get subtle revisions.

Feature-wise, navigation is now standard on the GS lineup, and these models gain upgraded multimedia tech, with an improved Remote Touch interface plus rich new colors and trims.

Pricing hasn't yet been announced for the new GS lineup, which arrives later this year. Take a look at our photo galleries, and visit our pages on the 2016 Lexus GS for more.