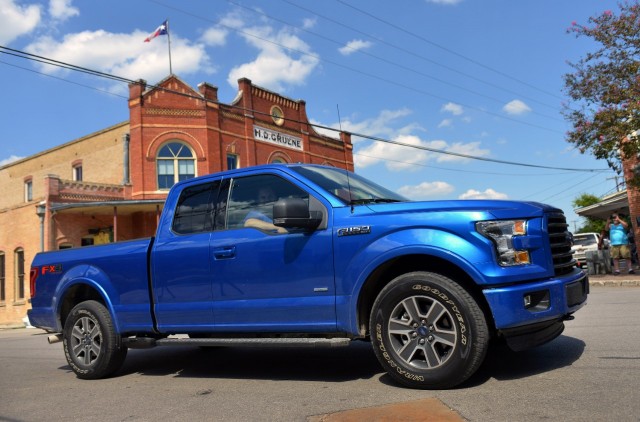 First, the good news: IIHS says that the F-150's new aluminum body provides just as much crash protection as its steel predecessor. While some critics had doubted that lighter-weight aluminum could keep occupants safe during collisions, IIHS insists that it absolutely does.

In fact, the 2015 F-150 SuperCrew -- the one with a full backseat -- earned "good" scores in all IIHS tests, including the new, difficult small overlap front crash. As a result, it's been awarded the designation of "Top Safety Pick".

(Though Ford offers a collision warning system on the F-150, the truck isn't eligible for IIHS' highest honor of "Top Safety Pick+" because the system doesn't include autonomous braking.)

Now, the bad news: the 2015 Ford F-150 extended cab -- the one with a compact second seating row -- didn't fare quite as well as its larger sibling. It earned "good" scores on the IIHS moderate overlap front, side, roof strength, and head restraint tests. On the small overlap front crash test, however, the extended cab was rated "marginal" because...

"Intruding structure seriously compromised the driver's survival space, resulting in a poor structural rating. The toepan, parking brake and brake pedal were pushed back 10-13 inches toward the dummy, and the dashboard was jammed against its lower legs. Measures recorded on the dummy indicated there would be a moderate risk of injuries to the right thigh, lower left leg and left foot in a real-world crash of this severity.

The steering column was pushed back nearly 8 inches and came dangerously close to the dummy's chest. The dummy's head barely contacted the front airbag before sliding off to the left and hitting the instrument panel."

Why the difference? IIHS' David Zuby says that "Ford added structural elements to the crew cab's front frame to earn a good small overlap rating and a Top Safety Pick award but didn't do the same for the extended cab. That shortchanges buyers who might pick the extended cab thinking it offers the same protection in this type of crash as the crew cab."

In other words, the F-150's aluminum body offers plenty of protection to occupants. The problem with the extended cab is that it doesn't come with the same structural supports that mitigate damage on the SuperCrew.

And here's a little more bad news: IIHS says that the new F-150's aluminum body is more expensive to repair than its steel-bodied predecessor. IIHS ran two crash tests, pitting the 2015 model against a 2014 F-150:

In both test scenarios, the aluminum F-150 had more extensive damage than the steel model. Total repair costs for the front and rear damage combined were 26 percent higher for the aluminum F-150. Extra time to repair the aluminum body accounted for the higher price to fix frontal damage, while higher parts costs pushed up the repair bill for the rear damage.

In other words, the 26 percent price jump on the 2015 F-150 isn't just because the truck's aluminum gets more dinged up during collisions than steel. It's also because that aluminum takes longer to repair, resulting in higher labor costs.

READ: Apple Is Getting Very Serious About The Whole Car Thing

However, Ford disputes the IIHS' findings on repair costs. The automaker has issued a statement that says, in part:

"Ford does not agree with the reparability costs and findings by IIHS and other stunts. Ford’s view is based on real-world accident repair data. In fact, real-world repair costs on the new 2015 Ford F-150 average $869 less than last year’s F-150 model, according to Assured Performance, an independent body shop certification company that works with leading automakers."

According to Ford, both Allstate and State Farm say that insurance costs for 2015 F-150s are on par with those for 2014 models. And the automaker has issued a handy PDF to dispel what it sees as myths about repairing the new, aluminum-bodied truck. Be sure to take a look at that and at the IIHS video above.

Do you own a 2015 F-150? Have you been involved in a crash or had to have it repaired? Share your experiences below.