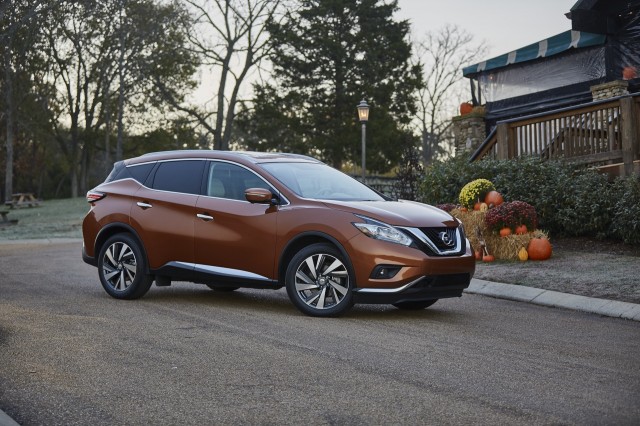 Nissan has issued two unrelated recalls for 2015 models of the Nissan Murano and Nissan Rogue. While the former suffers from a problem with its anti-lock braking system, labels on the latter could cause problems with the vehicle's tires.

The Murano recall stems from a problem with the crossover's anti-lock braking system, which was manufactured by ADVICS North America.

According to the National Highway Traffic Safety Administration:

Should that happen, the vehicle could have trouble maintaining stability, increasing the risk of an accident.

(If this sounds familiar, that's because a similar problem with ABS valves recently led to a recall of nearly 75,000 Mitsubishi models from 2006-2009. Though Mitsubishi's NHTSA bulletin doesn't contain details about the manufacturer of the faulty ABS devices, it's unlikely that the problems are related, since Mitsubishi's models were several years older than Nissan's.)

Nissan says that it will notify owners of the recall by mail in early August. After receiving those notices, owners will be able to take their vehicles to Nissan dealers, who will inspect and replace the ABS actuator, as necessary, at no charge.

The smaller of Nissan's recalls stems from some mis-labeling -- specifically, incorrect information about the Rogue's tire size. If owners need to have those tires replaced, that misinformation could result in the wrong tires being placed on the vehicle, increasing the risk of a crash.

You might be wondering why the recall is so small, given the popularity of the Rogue. That's because the recall is limited to 2015 Rogue Select models that were built during a narrow window between November 17, 2014 and December 12, 2014. It's also limited to vehicles equipped with seventeen-inch wheels.

As with the Murano recall, this is expected to begin in August. The upside is that owners won't have to take their vehicles to a dealership; Nissan will simply mail out a replacement tire label.

CHECK OUT: Chevrolet Adds Theft Alarm Feature: Now Your Car Can Text You If It's Being Stolen