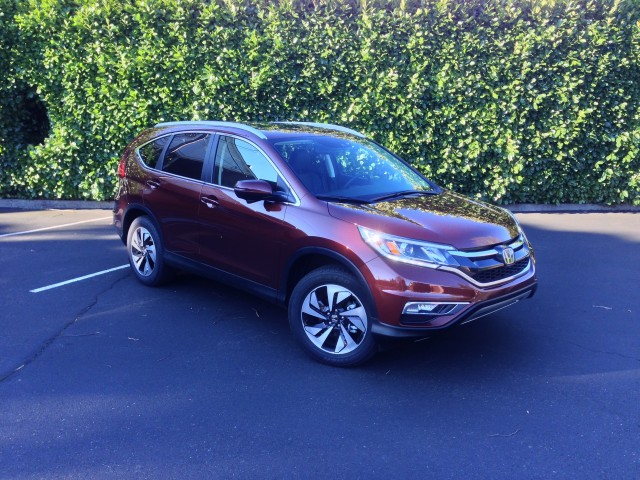 Honda says that the CR-V is the best-selling entry SUV of all time, and it’s easy to understand why this model has earned that title.

Put simply, it keeps with the times and delivers, in an entirely pragmatic way, all that most families need, with enough personality to not leave them wanting.

Although this model might not win you over with its exterior styling, compared to racier compact crossovers like the Ford Escape, or the more flamboyant Jeep Cherokee, the 2016 Honda CR-V absolutely excels for all the reasons that have cost-conscious families turning to compact crossovers instead of mid-size sedans—or in many cases, instead of minivans or larger crossovers.

Visually, the front end improves by leaps and bounds compared to when the current generation made its debut, and it’s all the product of some better-coordinated details. The grille and headlamps now work together as a single design piece—like outstretched wings, we think—and the running lamps in the Touring model we drove function as super-cool bold outlines for the headlamp enclosure. What’s more, the swept-back headlamp look actually seems to complement the roofline and profile. In back, there’s nothing that radical; while we’re strongly anti-chrome-bar around here (stylists are doing it everywhere, seemingly in mindless synchony).

What a great, people-sized package

That’s all a diversion, though, as the backseat is probably the place to start checking out the CR-V. It has all the headroom and legroom that six-footers will need, and while it’s a little bit narrower than mid-size crossovers, there’s really not much of a difference anymore. Back-seat riders get vents plus cupholders in the fold-down armrests.

In front or in back, it’s one of the easiest crossovers to get into; you don’t sit unnecessarily high here—and the seats in our Touring tester were susprisingly good, with plenty of thigh support even if there wasn’t really any lateral support to hold you in place in corners.

There’s a lever back by the cargo space that lets the seats flip down easily, with a spring-actuated mechanism, not tedious motors. That cargo space is excellent, with a low floor and super-easy loading through the big hatch and wide side doors. There was a power tailgate included in our test car, and we weren’t fond of its slow operation and the hump that it introduces ahead of the hatch opening on the left side.

CR-V really shows its strengths in the details. There are plenty of bins, and the center-console storage is one of the best in any crossover vehicle, period. Cupholders are well-placed, the bin has a shelf-like cover, and there are various plugs for USB and inputs—including HDMI.

The navigation system has been revamped, and while it’s still not perfect—we still can’t shut off the beeps, Honda, please tell us how—it no longer feels laggy. And we’re starting to make sense of the double-screen layout in its present form.

The only odd omission in Honda’s upgrade of materials is that the side doors still have quite a bit of hard plastic—including up where elbows of front-seat passengers might go from time to time. On a coarse stretch of Interstate highway, we also thought that there was a fair amount of pavement coarseness making its way into the cabin; we’d have a harder time forgiving this if it carried a luxury badge.

As for the powertrain, it’s mostly a good step forward. The Honda CR-V was for the 2015 model year essentially given the powertrain that we already have come to know and love in the current Honda Accord—the 2.4-liter ‘Earth Dreams’ direct-injection four-cylinder engine, as well as a continuously variable automatic transmission (CVT).

The CVT has a so-called ‘G-design Shift,’ meaning that it provides subtle steps along the way to help bring more of a feel of acceleration to the driver, with less of the rubber-band-like responses and the ‘motorboat’ soundtrack that accompanies too many vehicles with four-cylinder engines and CVTs.

Good drivability for a CVT...but stay away from Econ here

Sport mode keeps the revs a bit higher (it’s good on a backroad just to reduce those moments of indecision), while Low is aimed at maximum engine braking (surprisingly there’s a fair amount of it); there’s also an Econ button that puts the climate control on a more conservative setting, delays CVT responsiveness, and gives you a lazier throttle tip-in. In this case, don’t go there.

You’re not going to be driving the CR-V in spirited fashion in the twisties anyway. This is a quite softly sprung family wagon through and through, with light (some might say overboosted) steering and lots of nosedive in hard stops. One surprising part is that if you push past its fair amount of body lean, the entire setup is quite capable; there’s nothing about this chassis that makes it ill-equipped for curvy roads, and unlike other crossovers, the CR-V transfers weight well and loads and unloads its front end in a way that’s always safe and has more confidence and capability (and grip) than you might think.

There’s much to like here. Fuel economy is better, too. Our all-wheel-drive model carried EPA estimates of 26 mpg city, 33 highway, and in nearly 140 miles of driving, mostly in city and suburban conditions—we averaged 26 mpg.

An issue not yet solved

Now for the one thing we didn’t like: During the time we had the CR-V Touring, we noticed an unacceptably rough idle when the engine was fully hot, and a persistent vibration with the shifter in 'D' or to a lesser extent 'R'. See our related post for an update on that as they’re working on a fix. For now we wouldn't call it a dealbreaker, but the timing on this one is a headscratcher... Why wait, if they fix it for 2016 and are going to have to fix all the flawed 2015s?

The one other thing we’d note is that our test car was a top-of-the-line 2015 Honda CR-V Touring AWD, totaling $33,775. We’d venture to say that the CR-V remains the strongest value not at all there but at the entry side of its lineup; a CR-V LX AWD, for instance, costs $25,575.

The CR-V remains one of our best-rated affordable crossover wagons here at The Car Connection, and revisiting it here reminded us why: it’s unpretentious, and modest but not overly so. The Civic of crossovers, we might say.