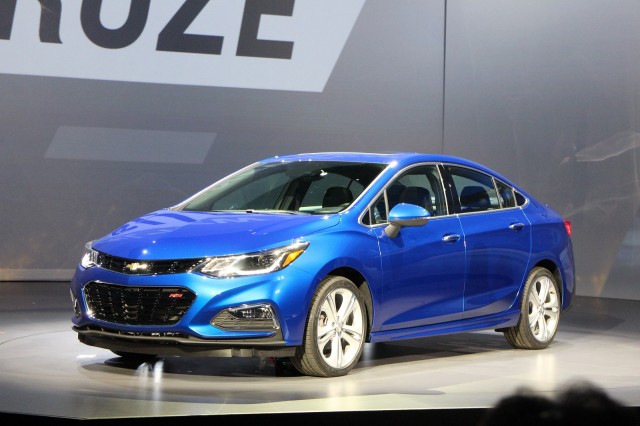 General Motors [NYSE: GM] has pulled the wraps off a fully redesigned version of its affordable mainstream compact sedan, the 2016 Chevrolet Cruze.

While this model gets somewhat longer and more spacious, it also sheds 250 pounds and becomes more fuel-efficient. Its design also keeps with the evolution of recent Chevy sedans like the new Malibu and upcoming 2016 Chevrolet Volt—with more of a roofline arc, as well as well as a chiseled look down low and in back, complemented by a new version of the dual-grille front end.

While the 1.4-liter turbocharged Cruze—offering up to 40 mpg highway—will go on sale early in calendar-year 2016, as a 2016 model, the 1.6-liter turbo-diesel model that’s already been confirmed won’t arrive until later in the year, likely as a 2017 model. In all cases, this might be the most safety-loaded vehicle in its class, with ten standard airbags and a suite of active-safety features available.

According to CarsDirect, the current Cruze will be carried over for at least one more model year, as the Cruze Limited. This is a strategy that’s been used by a number of automakers to keep up production volume as new models are phased in.

A five-door hatchback version of the Cruze has reportedly been approved and will join the U.S. lineup by next model year.

See our preview page on the 2016 Chevrolet Cruze for more details, as well as more information on specs, pricing, and features as soon as we have it.