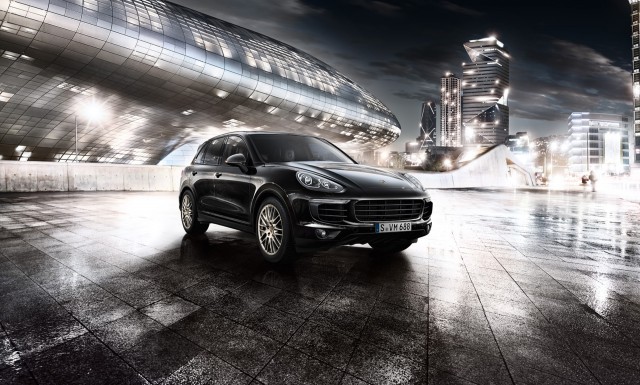 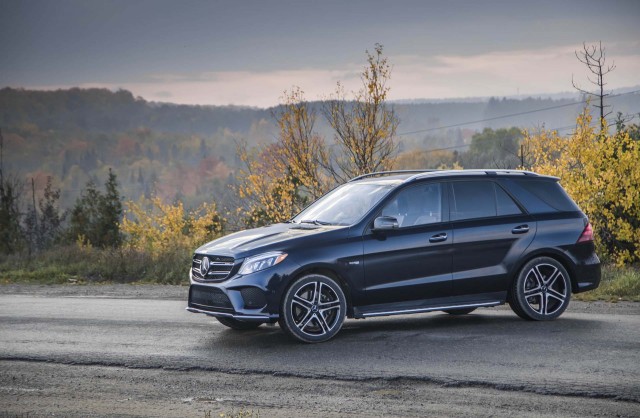 The Porsche Cayenne and Mercedes-Benz GLE-Class both aim to seduce busy, affluent parents with premium ambiance, real luxury-vehicle cabins, and performance that might help them forget the grind of the commute and child ferrying. At the same time, and in some ways, they’re both rugged minivan substitutes for parents who won’t want to let on that they’ve surrendered entirely to domestic duty.

How do they compare? Let's dig into the numbers to find out.

MORE: Read our reviews of the 2017 Mercedes-Benz GLE Class and the 2017 Porsche Cayenne 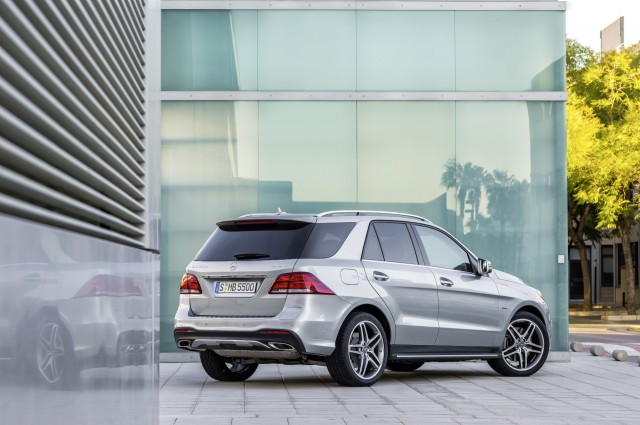 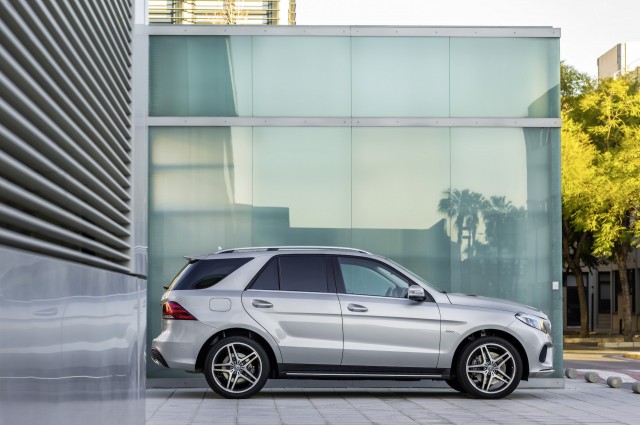 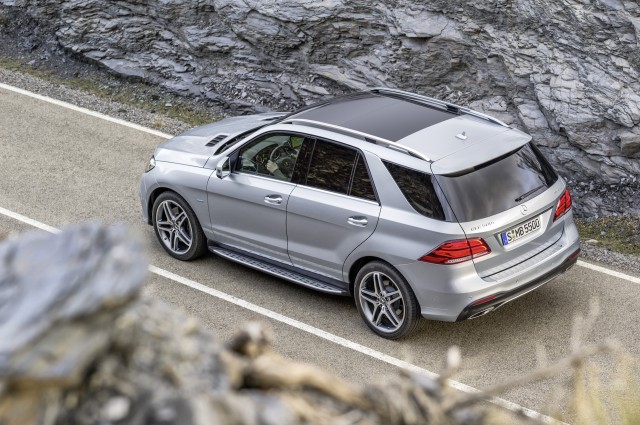 The overall scores here: 7.0 for the Cayenne and 7.7 for the GLE-Class are a little deceiving. One of the options is the better pick for performance, the other is an outright utility hauler. Moving beyond the overall scores reveals a little bit about our preferences for the models. (Read more about how we rate cars.)

While the Porsche Cayenne is now a known entity around upper-crust suburbs, the GLE was a new badge for 2016. It’s familiar territory, though, as it’s essentially a refreshed-and-rebadged version of the third-generation M-Class that’s been around since 2012. Key upgrades this year include revamped front and rear styling, a new freestanding infotainment screen (still not touchscreen, though), and some improved active-safety items. The current Cayenne has been around since 2011, although an all-new model isn’t likely due until the 2018 model year. Yet this model still looks reasonably fresh, as for the 2015 model year Porsche gave it some revised sheet metal, an improved feature set, and some new powertrains.

To put it as tersely as possible, both of these models merely tow the line on design and styling expectations for their respective brands. The Cayenne’s high-utility form might not be that of any Porsche before it, but it mates that with a front-end appearance that calls itself out as a Porsche quite convincingly; likewise, the dash doesn’t stray too far from the brand’s sports-car interfaces. While some of Mercedes-Benz’s latest products like the new C-Class and GLA-Class have taken more radical steps with exterior styling and have a plush, above-the-top feel inside—the GLE-Class follows its M-Class lineage closely. The dash in particular is a bit more upright and conservative compared to those other models.

The secret is—provided you don’t have more than a couple of kids—there’s lots of practicality with either of these vehicles. And the other secret is that both of these models come in some very high-performance variants that actually rival serious sports cars. For instance, the Porsche Cayyene Turbo now makes 520 horsepower from its twin-turbo 4.8-liter V-8, while the Mercedes-AMG GLE63 makes 550 hp (or 577 in GLE63 S form). Both of these models can get to 60 mph in the low-4-second range, with the growling soundtrack of an exotic.

In both cases, there are far more modest and fuel-efficient—if not outright frugal—versions of these models. In the GLE550e, a 3.0-liter V-6 and electric motors make 436 hp and manage better than 20 mpg combined. The Cayenne is also offered in hybrid form, but it manages only 22 mpg combined from its V-6 and battery combo. The old naturally aspirated V-6 is gone from the Cayenne lineup, and in its place is a stout twin-turbo V-6 that makes 420 hp in the Cayenne S. While the base gasoline Mercedes-Benz GLE-Class model is the GLE350, with its plenty adequate 302-hp, 3.5-liter V-6, neither that nor the 362-hp, twin-turbo GLE43 match the gusto of the Cayenne S.

The GLE-Class does have one special trick up its sleeve: the GLE Coupe, which isn’t a coupe in the traditional sense, but rather a version of the GLE with a swoopier, more rakish roofline and fastback-style rear glass. The GLE is offered with one additional engine variant that’s more competitive with the Cayenne: a 362-hp version of the twin-turbo V-6. There’s no such model in the Porsche lineup—although we would point to the lower, better-handling Panamera if looking trail-ready isn’t really one of your priorities.

By the way, while seeing either of these two models out on a serious off-road trail would be novel and extremely rare, they’re both offered with packages that really do add some level of additional toughness.

Both of these models offer high-tech self-leveling air suspensions as options, as well as active-damping systems. In the Porsche it’s one or the other, but in the GLE you can now get them both together. While the Cayenne is the sportier of the two when the road gets twisty, it’s closer than you might think, and in ride and handling, we’d nod to the GLE-Class as the clear winner. 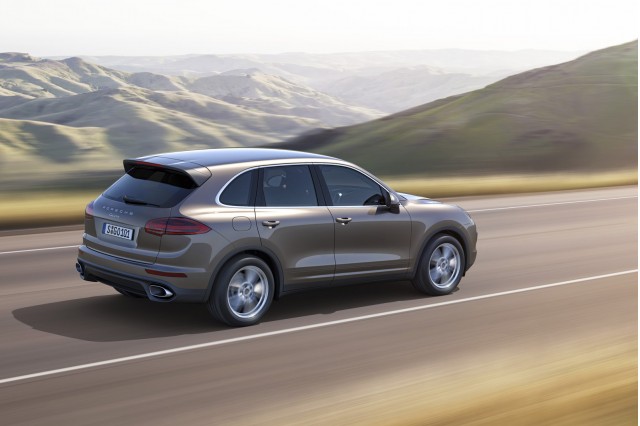 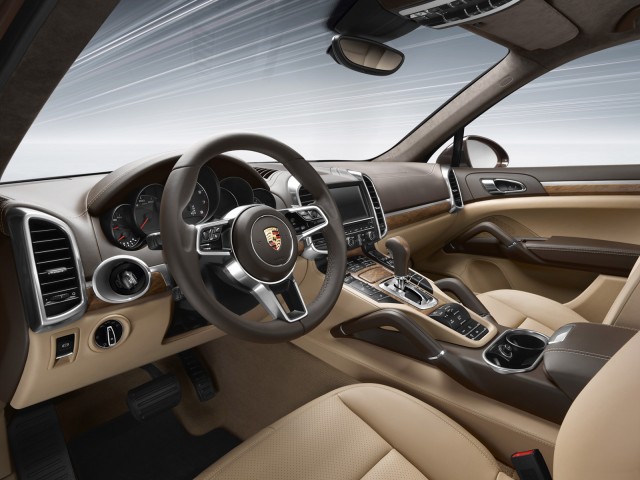 Both of these models are available in plug-in hybrid variants. For 2015, the Porsche Cayenne S E Hybrid joined the lineup. This model uses a 10.8-kwh lithium-ion battery pack, combined with a 333-hp, 3.0-liter supercharged V-6 engine, to provide 416 horsepower. On the Mercedes side, the GLE550e has an 8.8-kwh battery pack and mates a 329-hp, direct-injected 3.5-liter V-6 with a hybrid module of 114 hp output, for a total output of 436 hp and up to 19 miles of pure electric driving. Both of these models include modes that allow you to recharge the battery pack while driving, although the Porsche allows a somewhat more robust all-electric mode.

Interior appointments in both of these models are mostly everything you might expect—with versatile layouts and plenty of head room and leg room, even for taller adults, in front and in back. One of the key differences in packaging is that in the Cayenne the rear seatbacks don’t quite fold fully flat—meaning that moving larger items might be a little more challenging. It’s also not quite as isolated and quiet on coarser surfaces as the Mercedes-Benz.

In safety, we’re putting the GLE-Class in the lead, since it carries over the underlying structure of the M-Class, which has achieved stellar occupant safety ratings from both U.S. agencies. There are also a few more active-safety features in the Mercedes-Benz, including a drowsy-driving detection system, active lane control, night vision, and forward collision warning with automatic emergency braking. Meanwhile, the Porsche has many of those features, including a pretty great surround-view camera system. Many of these active-safety features are optional in both models, however.

Infotainment is a key difference between these two models. While the Porsche has all the functionality you might expect from such a system in a luxury vehicle, its system feels more cobbled-together than the COMAND system (and large 8.0-inch screen in some models) of the GLE-Class. Mercedes’ menu system isn’t always straightforward either, but with the addition of a touchpad, it’s far easier to use than it was some years ago.

And that kind of sums up a word of advice on these two luxury utility vehicles. Keep in mind that to get a vehicle with all the bells and whistles (and hey, in this class, why not?) you’ll be adding $10,000 or more to the entry price of any of these variants. Many of those options—like the Sport Chrono package, if you’re getting one of the higher-performance versions of the Cayenne, or either of the premium audio systems offered in the GLE—are entirely worth it.

Neither of these luxury 'utes leaves the other entirely in the dust. It’s a close match, yet in all the pragmatic respects that we tend to emphasize a little bit more here on this site, the Mercedes-Benz GLE is the clear winner. But be sure to read both of our full reviews in detail, and reorder the priorities to suit your own needs.

7.0
Expert Rating
The 2017 Porsche Cayenne is versatile and roomy, yet it possesses road and even track performance to satisfy enthusiasts.
7.7
Expert Rating
The 2017 Mercedes-Benz GLE-Class pared down its powertrains to gas only or a plug-in hybrid, although it still has plenty of stops in between for luxury buyers.

7.0
Expert Rating
The Cayenne manages to crib some of the 911's curves while maintaining a traditional crossover shape.
Read More
8.0
Expert Rating
The GLE-Class is handsome, top to bottom, with some daring "coupe" options that stretch the definition of the word, but are standouts on the road.
Read More

Don't expect the Cayenne to be crash tested, but take heart that it does offer an abundance of advanced safety features.
Read More
7.0
Expert Rating
The data is incomplete, but what's in so far is stellar.
Read More

7.0
Expert Rating
High prices bring a solid set of standard features, and buyers can spec out their Cayennes to the hilt, but pricing gets out of control when they do.
Read More
9.0
Expert Rating
Well-heeled parents can get front-seat massages while children grind cereal into supple nappa leather.
Read More

All Wheel Drive Read Full Specs
Rear Wheel Drive Read Full Specs
Compare Free Dealer Price Quote
With competitive price quotes from multiple dealers, you will be prepared when you meet your local car dealer. Please tell us how to contact you so that dealers can compete for your business!
2017 Porsche Cayenne
There are no Porsche dealers in our network that are located near the ZIP code.
2017 Mercedes-Benz GLE Class
There are no Mercedes-Benz dealers in our network that are located near the ZIP code.
Thank you!
We have sent your request for price quotes on the 2017 Porsche Cayenne and 2017 Mercedes-Benz GLE Class to the dealers you requested. They should be in touch shortly.
The Car Connection's dealer quote process is powered by our partner site CarsDirect.
Your request for a fast, free price quote on a 2017 Porsche Cayenne and 2017 Mercedes-Benz GLE Class is in process. The CarsDirect Dealer(s) listed below will contact you shortly to discuss your request and to provide a quote. If you have questions now, you can contact the dealer(s) directly using the information provided below or contact CarsDirect's award-winning customer service team at 1.888.CarsDirect (1.888.227.7347) or [email protected]
For your reference, your customer transaction number is .
Tell us a little bit about yourself
Looking for dealers in your area...

*As configured. Excludes taxes, title, license and other customary fees, such as dealer documentation fees, tire and battery disposal fees and, where applicable, finance charges. By clicking on “Get Your Price Quote Now”, you agree to our Terms of Use (including the Supplemental Terms) and Privacy Policy. You further consent to being contacted at the number you provided by CarsDirect and certain participating automotive dealerships, which may include autodials, text messages, and/or pre-recorded calls; this consent is not a condition of purchase or service. Message and data rates may apply.
Have feedback about this experience?
Let us know.
Tags:
2017 Compare Cars Mercedes-Benz GLE Class News Porsche Cayenne News Porsche News
2021
The Car Connection
See the winners »
2021
The Car Connection
See The Winner and Nominees »