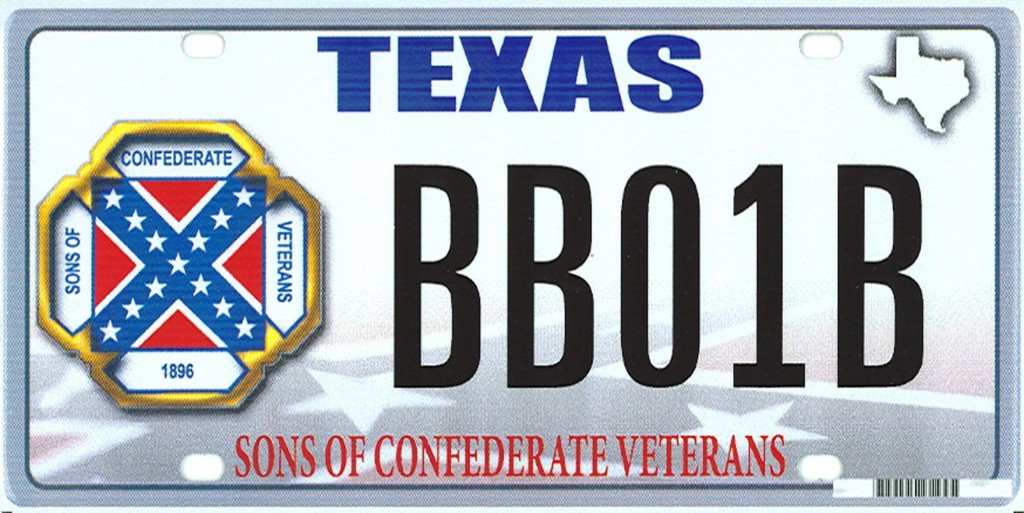 That's made things tough for DMVs, who've been put in the position of policing messages on plates. In making their decisions, DMVs tend to insist that license plates are state-sponsored messages, and what may be appropriate for a bumper sticker may not be the sort of thing that a state wants to put on a product that it manufactures and sells. Free-speech advocates have disagreed.

The issue came to a head this year in a case called Walker, Chairman, Texas Department of Motor Vehicles Board, et. al. v. Texas Division, Sons of Confederate Veterans, et. al. Today, the Supreme Court handed down its ruling in that case, and although the decision was split, it gives states the right to pick and choose the sorts of messages they send -- at lease on license plates.

The Texas DMV solicited comments from the public, as it does on all specialty plates. Ultimately the DMV denied SCV's application on the basis that many commenters found the design to be offensive and that the Confederate flag is frequently linked to hate groups. SCV sued.

The federal court that first heard the case handed Texas a win. However, the Fifth Circuit Court of Appeals -- notably, one of the nation's most conservative courts of appeal -- reversed the lower court's decision, ruling that messages on specialty license plates generally constitute free speech and can't be rejected simply because some (or many) might find the content offensive.

Today, the U.S. Supreme Court overturned the Fifth Circuit in a 5-4 vote. Voting in the majority were Justices Breyer, Ginsburg, Kagan, and Sotomayor, who were joined -- interestingly -- by the deeply conservative Thomas. Justices Alito, Kennedy, Roberts, and Scalia dissented.

In his majority opinion, Breyer wrote that license plates function much like state IDs, and are therefore, state speech. As such, the state has the right to pick and choose the message that it wants to convey on the plates, rather than presenting all sides of an issue. For support, he makes this analogy:

"How could a city government create a successful recycling program if officials, when writing householders asking them to recycle cans and bottles, had to include in the letter a long plea from the local trash disposal enterprise demanding the contrary? How could a state government effectively develop programs designed to encourage and provide vaccinations, if officials also had to voice the perspective of those who oppose this type of immunization?"

Justice Alito delivered the minority opinion, in which he lamented the majority's decision as an erosion of free-speech rights. In a fairly informal dissent, he argued that a reasonable person would never see a specialty license plate a state-sanctioned message, but one endorsed solely by the vehicle's owner. Here's a fairly long excerpt:

"Suppose you sat by the side of a Texas highway and studied the license plates on the vehicles passing by. You would see, in addition to the standard Texas plates, an impressive array of specialty plates. (There are now more than 350 varieties.) You would likely observe plates that honor numerous colleges and universities. You might see plates bearing the name of a high school, a fraternity or sorority, the Masons, the Knights of Columbus, the Daughters of the American Revolution, a realty company, a favorite soft drink, a favorite burger restaurant, and a favorite NASCAR driver.

"As you sat there watching these plates speed by, would you really think that the sentiments reflected in these specialty plates are the views of the State of Texas and not those of the owners of the cars? If a car with a plate that says 'Rather Be Golfing' passed by at 8:30 am on a Monday morning, would you think: 'This is the official policy of the State—better to golf than to work?' If you did your viewing at the start of the college football season and you saw Texas plates with the names of the University of Texas’s out-of-state competitors in upcoming games— Notre Dame, Oklahoma State, the University of Oklahoma, Kansas State, Iowa State—would you assume that the State of Texas was officially (and perhaps treasonously) rooting for the Longhorns’ opponents? And when a car zipped by with a plate that reads 'NASCAR – 24 Jeff Gordon,' would you think that Gordon (born in California, raised in Indiana, resides in North Carolina)...is the official favorite of the State government?"

He follows that with an appendix of license plates that could be seen as controversial, including plates sponsored by the Boy Scouts of America, Florida State University, ReMax Realty, and numerous gun-rights groups.

What does this mean for you and your favorite school or nonprofit when you propose a specialty plate? Probably nothing, provided the message on the plate is inoffensive. But if the DMV shuts you down, you may be forced back to the drawing board.

You can read the entire opinion in PDF form by clicking here.