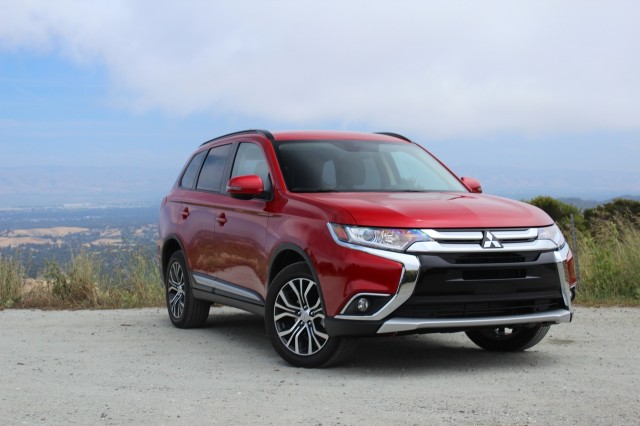 Starting out in the passenger seat is one of the better ways to acquaint oneself with the 2016 Mitsubishi Outlander. Car critics tend to fixate on what's new and fast and thrilling from the driver's seat, and here, it pays to 'recalibrate' first—by taking stock of the ride, the ambiance, the trims and features, and checking out the seat configurations in back.

It's a reality check, and in this lens the Outlander is a very good vehicle for the target buyer.

Working from the inside out, and saving this model's brand badge for last, is really the best way to look at the Outlander. While Mitsubishi used to be a full-line automaker, it isn’t anymore, and the brand’s products are, frankly, all over the place in terms of how well each fits into the market.

The cheapskate-on-wheels Mirage and now-aged Lancer lineup aside, Mitsubishi might be best called “the automaker for small utility wagons”—and that’s really not a bad place to be. Along with the smaller Outlander Sport (or RVR in Canada) tall-hatch crossover that’s now as refined as it should have been when it launched several years back, the 2016 Outlander remains perhaps Mitsubishi’s best hope, and best reason for still being, in the U.S. market.

ALSO SEE: NHTSA Is Developing An Alcohol Detection System To End Drunk Driving: Would You Buy It? (Video)

That’s because pragmatically, it does several things that other compact crossovers don’t—like fit a third row into every model of the lineup, and keep a V-6 on the table. For the value-minded, you can get what feels like a lot of well-equipped vehicle for an affordable price. And if you dig deeper, the Outlander doesn’t disappoint, and remains true to that first impression.

When this third-generation version of the Outlander was first developed, it might not be an exaggeration to say that Mitsubishi was a flight risk in the U.S. Now, with the company working to get focused here, with more of a long-term product vision—and Mitsubishi in Japan turning to pay attention (as we’ve ascended to Mitsubishi’s second-best world market, in sales)—the Outlander is getting what amounts to a pretty extensive mid-cycle refresh.

Mitsubishi’s U.S. team pointed us to the countless details, on a model that we already liked quite a bit, except for a few minor missteps. And thankfully, they took care of some of the most dire elements. The clunky, complicated second-row seat-folding arrangement, some trims and materials that felt a little behind-the-times, and (in four-cylinder models especially) a little too much noise altogether making its way into the cabin: It’s all fixed now.

While the base 166-horsepower, 2.4-liter four-cylinder engine in the Outlander hasn’t changed—and it sure isn’t a lot of motivation for a 3,500-pound vehicle—its partner has, and that goes some distance in helping it feel a little perkier and a little less droning than before.

For 2016 the Outlander four-cylinder models get the latest, so-called ‘CVT8’ version of the (Jatco-supplied) continuously variable automatic transmission. Total ratio span is 7:1, as opposed to 6:1 in the previous unit, which equates both to a lower ratio (and quicker takeoff) from a standing start and a somewhat taller one for lower-rev highway cruising.

Perkier than before—but still not quick

It’s a pretty significant difference. Mitsubishi claims to have knocked a second off this model’s 0-62 mph acceleration—now 10.2 instead of 11.2—and it’s worked on quicker transitory response, to order up a lower ratio quicker, when needed for passing.

That said, the programming behind this CVT aims to allow behavior that’s closer to that of a standard automatic transmission—holding ratios during moderate acceleration, and downshifting quickly to lower ratios that 'grab' and give you more of a sensation of progress. In reality, it goes about its drama in level, light-load driving, and in faster paces you lose some of the ‘motorboating,’ ‘rubber-band’ sensations of the CVT; but when we took on backroad hills and curves, we experienced a lot of hunting up and down from the unit, even as we climbed a steady grade and kept the accelerator relatively steady.

Although we’d still rather have the traditional six-speed automatic that the GT (V-6) model gets, that model somehow isn’t as appealing as it might seem at first blush. It’s one of the few crossovers in its class to still offer a V-6, and so-equipped it can tow up to 3,500 pounds; the Chevy Equinox is the closest model we can think of with a V-6 option, and it’s a few inches longer than the Outlander.

Yet from the driver’s seat, the V-6 model feels heavy. It doesn’t feel as nimble, for sure, and it somehow drives even heavier than the approximately 100 extra pounds it carries. Part of this may just be from the expectation that a V-6—even one with 224 hp—should have more low-end torque. This one doesn’t; it needs to be revved, and it can feel decidedly flat in the 2,500-rpm range, where most other non-turbo V-6s really come to life. Ford’s 2.0-liter EcoBoost four in the Escape feels like an absolute hot rod compared to this.

If we didn’t discourage you enough about the top GT, it’s worth noting that V-6 models have premium fuel recommended, as well. Mitsubishi is guessing only 10 percent will opt for this model, and we think that might be optimistic.

Four-cylinder models tend to drive a bit better anyway, if the judge is anything but the powertrain. Across the model line, to improve ride and handling, Mitsubishi has reinforced the front suspension crossmember then changed the spring rate and retuned the shocks to match. In back, there are larger shocks and also a different spring rate that Mitsubishi officials described at just a bit sportier but without any noticeable sacrifice in ride.

Keeping in mind that the Outlander isn’t at all performance-minded, it’s perfectly fine for the task. Yes, when we pushed it hard on the choppy pavement and ill-banked esses of Skyline Drive, near Half Moon Bay—in all fairness, a kind of driving most Outlanders will seldom if ever see—the rebound characteristics of the front end especially weren’t quite as buttoned-up (or is that buttoned-down) as we might have hoped. There's an odd lift-and-wallow as you unwind from a tight corner, and more nosedive in hard braking than most of its peers. The steering is weighted a little too aggressively on center; but overall this is a confidence-inspiring, easy-driving crossover.

And it rides quiet. To the order of U.S. market demands, the automaker has made 31 different enhancements—including enhanced underbody noise insulation, thicker alloy wheels, upgraded windshield and door glass, redesigned door mirrors, and even a dynamic damper system for the engine—all of which greatly cut engine, road, and wind noise, it claims.

The 2016 model is different in all sorts of other ways. The old mouse-fur headliner has been replaced by a ‘knit’ material, while the instrument cluster gets contrast stitching, the leather-trimmed steering wheel gets accents, there’s more padding for the center console, the base seat fabric is improved, and new accent panels have been added. Even better, the plasticky-looking faux wood has now been retired. Essentially, it’s up to par with its rivals like the Nissan Rogue, Subaru Forester, Toyota RAV4, or Honda CR-V.

It’s roomier than most of those rivals inside. The Outlander includes supportive front seats with lower cushions just long enough for taller folks, plus a great driving position. And the second row doesn’t feel flat and hard, as in many crossovers in this class; it’s comfortable enough for adults. Of course, yes, there is that third seat, but just as with the third rows in the comparably sized Nissan Rogue and slightly larger Kia Sorento, it’s kid-sized, and very, very low to the cargo floor.

Mitsubishi has redone the convoluted second-row seat-folding arrangement of the previous models, and instead introduced a new three-step process: You flip the headrests forward first (no need to stow them anymore), then you lift the lower cushion and stash it against the rear of the front seat in a second motion, and finally you flip the second-row seatbacks forward. What you end up with is an excellent, perfectly flat cargo floor. Cargo lift height is low, too.

Does the Outlander succeed in looking distinctive on the outside? We think so; and overall, the exterior that was somewhat anonymous and out-of-pace with styling when it was originally introduced a couple of years ago is now looking refreshingly different in the market. Yet we’re not entirely fans of the ‘Dynamic Shield’ front- and rear-end theme—or ‘chrome fanged’ look, as we’ve heard it called. In profile, the look works very well, and with the introduction of the beautiful 2016 Volvo XC90 (yes, we see some similarities in the profile, but not the details), it fits in even a bit better.

An enticing value, if you steer away from the GT

Altogether, the Outlander is a little lacking in flair and personality, but it serves up functionality, value, and a whole lot of comfort and versatility. Mitsubishi points to the mid-level SEL, which adds to a total price of $27,395 when equipped with a Safety Package bringing Forward Collision Mitigation, Lane Departure Warning, adaptive cruise control, rain-sensing wipers, power-folding mirrors, and a windshield-wiper de-icer. In all, that’s the lowest-priced vehicle on the market with collision mitigation, Mitsubishi says, and it undercuts the Subaru Forester with EyeSight.

While we think the Outlander makes a lot of sense there, it’s less compelling as a $35,195 crossover (the GT, fully loaded with the Touring Package).

Mitsubishi is hoping that a new advertising push surrounding the product and its 2016 changes will help get word out and get this model into consideration for more shoppers. But if you ask us, it seems that Mitsubishi isn’t pulling out all the stops it can to get people into the door. It has reasonably impressive reliability, and it offers one of the better warranties in the business—10-year/100,000-mile on powertrain, 5/60k limited vehicle, and 5-year roadside assistance—especially noteworthy at a time when some automakers are cutting theirs.

There are no qualifiers needed here; the automaker has done a great job tweaking the packaging, performance, and presentation on the Outlander, and turning it into something a little more appealing than before.

The 2016 Mitsubishi Outlander is no second- or third-tier entry. It sells itself at face value, by delivering a little more than you might expect, in almost all of the practical ways a family would want. If Mitsubishi can repeat this act for its other models—and not shy away from bringing back more of its design panache—it may have found its second wind.