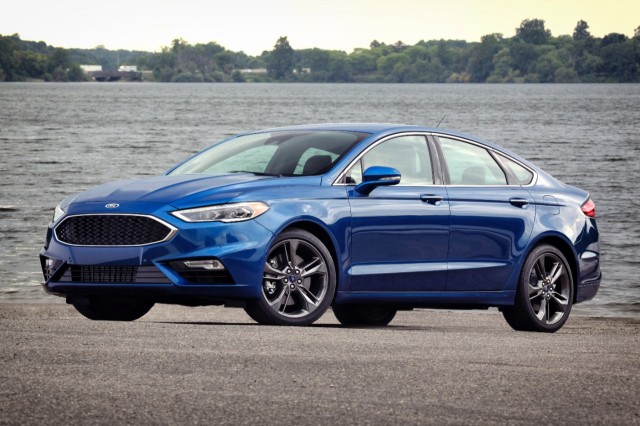 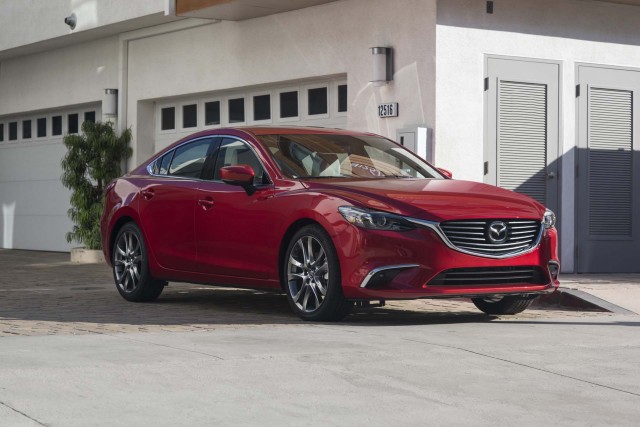 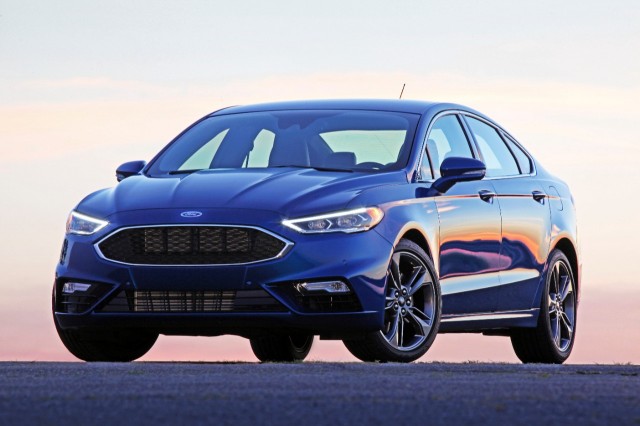 Design excitement is a rarity in the mid-size sedan arena. However, two models in particular bring some much-needed flair to the segment. They are the Ford Fusion and Mazda 6.

Both of these sedans have far more panache and subtlety in their designs, as well as more behind-the-wheel driving enjoyment, than you’ll find in most other mid-size sedans.

Our reviews show that we like both of these cars, and the ratings reflect that. Let's look behind the numbers, though, to see which is best for you. 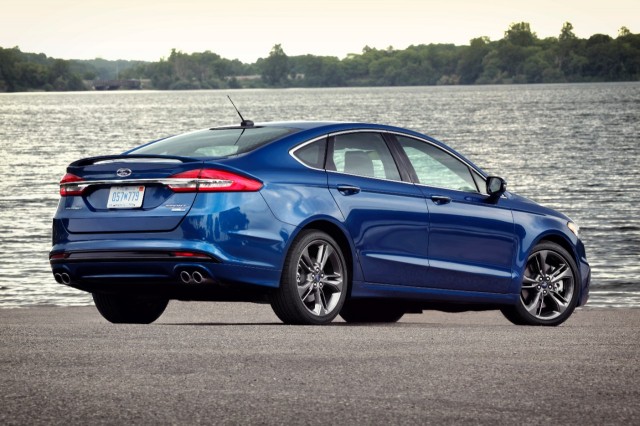 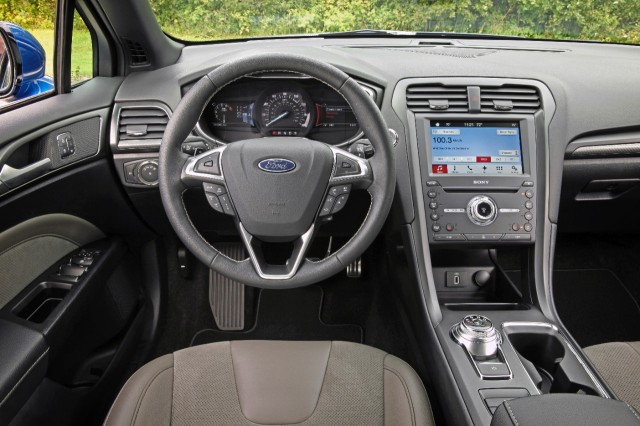 In styling, the Ford Fusion manages to maintain a delicate balance with a daring profile that’s simultaneously handsome and athletic. Even five years after its groundbreaking redesign, the Fusion still looks fresh. That said, so does the Mazda 6. If we had to choose a single mid-size sedan that’s the most finely detailed, voluptuous, and sexy, the Mazda 6 would be it. In profile, it could be mistaken for a rear-wheel-drive sport sedan, and it's hard to find a bad angle on this four-door.

Inside, the Mazda's isn't quite as seductive, but it is practical in all respects, with tastefully coordinated trims, vibrant use of color, and soft-touch materials wherever they should be. The Ford has a somewhat formal and well-detailed Euro-influenced look, balanced with a tablet-like center console.

These two models address performance and powertrain lineups quite differently, even though they’re both among the most engaging affordable sedans.

Both models offer a refined, well-tuned ride-and-handling balance that fully lives up to that standards of much more expensive European sedans. If anything it’s the Mazda that drives in an engaging way no matter what, with steering that’s quick and well-weighted, while it’s the Fusion that holds a slight ride-quality advantage.

Choice is the operative word for the Ford Fusion lineup, as it offers an array of engines, ranging from a 178-horsepower 2.5-liter 4-cylinder. to 1.5-liter or 2.0-liter turbocharged fours, all the way up to a 325-horsepower twin-turbocharged 2.7-liter V-6. And those aiming for top fuel-efficiency can choose from Fusion Hybrid or Fusion Energi (plug-in hybrid) models. There’s also all-wheel drive on offer on some of the lineup. On the other hand, the Mazda 6 is only offered with a 184-hp, 2.5-liter 4-cylinder, and a choice between 6-speed manual or 6-speed automatic transmissions—and only with front-wheel drive. Choice and power are a clear win for the Fusion.

The Mazda's limited engine lineup does give it one strength, however: fuel economy. The Mazda 6 is rated at 27 mpg city, 35 highway, and 30 combined with the automatic transmission. The Fusion's most comparable engine, the 1.5-liter turbo, is rated considerable lower at 23/34/27. However, Fusion buyers can opt for the hybrid or plug-in hybrid if efficiency is at the top of the want list.

In interior space, these two models are very close. We think the Mazda 6 might have a slight advantage in real-world cubes, and its flip-forward rear seatbacks provide a little more versatility than you might expect. In both of these models the rear-seat positions are a little bit short on headroom—the consequence of curvy rooflines. Trunk space is big-car sized, and front seats in both are superb. At the base level, we’d single out the perches in the Mazda 6 Sport, as they offer up great lateral support. 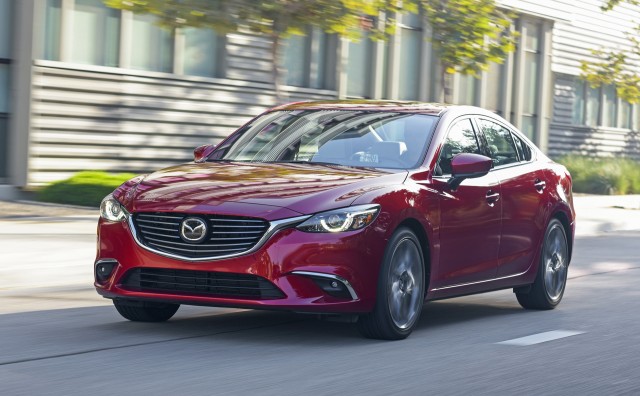 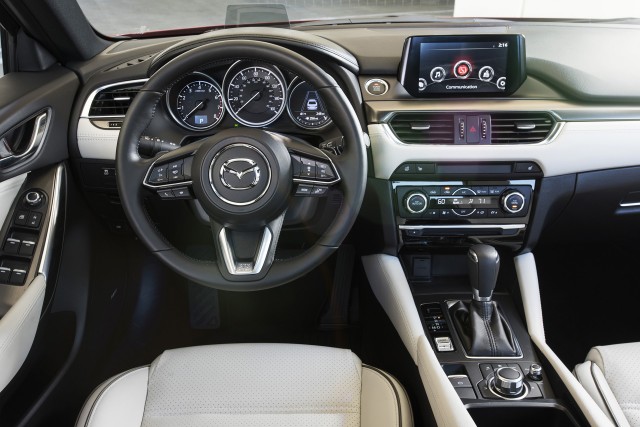 The Fusion is one of the more safety-minded picks in its class; with great crash-test ratings, items like front knee airbags, and a long list of available active-safety features. You can even opt to get Ford’s inflatable rear seatbelt system. The Mazda 6 is a strong performer, too, with five stars overall from the federal government as well as IIHS Top Safety Pick+ status. We also commend the Mazda for having a Smart City Brake Support system that might help prevent collisions due to driver inattention at low speeds.

Both cars also come very well equipped. The Fusion has a decent feature set on the base model, yet you can load it up almost to the level of a German sport sedan if you’re willing to pay extra for it—with full leather upholstery, navigation, upgraded audio, parking sensors, those active-safety features, and even that premium twin-turbo V-6 engine. On the other hand, the Mazda 6 meets the Fusion with just as strong of a game at the base model, and it has a simple lineup that offers a lot of value.

In sum, you really can’t go wrong with either of these models; while the Ford Fusion is offered in many more variants, including versions with more power and electrification, the Mazda 6 has a lot of charm, and manages to feel athletic and fun-to-drive despite how lean and frugal it is. At the low-priced end of the lineups, all else the same, we’d pick the Mazda. However, lineup to lineup, Ford offers more lavish and advanced variants, giving the Fusion more ways to win you over.

7.3
Expert Rating
The 2017 Ford Fusion blends enduring good looks, a wide variety of powertrains, impressive interior space and comfort along with all the latest electronic safety systems and a few design upgrades.
7.7
Expert Rating
Unless you're just power-hungry, the 2017 Mazda 6 remains one of the best family-sedan choices you can make.

7.0
Expert Rating
Graceful and gently sporting, the Ford Fusion has an appealing body and a middling interior.
Read More
8.0
Expert Rating
It's hard to find a more stylish mid-size sedan—inside and out.
Read More

7.0
Expert Rating
With either the available turbo V-6 or turbo-4, the Ford Fusion unspools plenty of power and a charming, taut blend of ride and handling.
Read More
7.0
Expert Rating
The Mazda 6 subscribes to the classic sports car definition: It handles wonderfully, but it won't win a drag race.
Read More

8.0
Expert Rating
Crash-test scores are good, and the Ford Fusion now offers the latest safety gear on almost every model.
Read More
9.0
Expert Rating
The 6 scores well in crash tests and its collision avoidance tech is available on a wide range of trims.
Read More

8.0
Expert Rating
Ford pushes the Fusion well past $40,000, but a well-equipped Fusion SE sedan is a good value.
Read More
7.0
Expert Rating
The Mazda 6 can feel almost luxury grade inside, but its infotainment system frustrates at every opportunity.
Read More

7.0
Expert Rating
Four-cylinder Ford Fusions are fine, but for the best fuel economy, find a Hybrid.
Read More
7.0
Expert Rating
At 35 mpg highway for the volume model, the Mazda 6 is one of the most efficient in its class.
Read More

Front Wheel Drive Read Full Specs
Front Wheel Drive Read Full Specs
Compare Free Dealer Price Quote
With competitive price quotes from multiple dealers, you will be prepared when you meet your local car dealer. Please tell us how to contact you so that dealers can compete for your business!
2017 Ford Fusion
There are no Ford dealers in our network that are located near the ZIP code.
2017 Mazda MAZDA6
There are no Mazda dealers in our network that are located near the ZIP code.
Thank you!
We have sent your request for price quotes on the 2017 Ford Fusion and 2017 Mazda MAZDA6 to the dealers you requested. They should be in touch shortly.
The Car Connection's dealer quote process is powered by our partner site CarsDirect.
Your request for a fast, free price quote on a 2017 Ford Fusion and 2017 Mazda MAZDA6 is in process. The CarsDirect Dealer(s) listed below will contact you shortly to discuss your request and to provide a quote. If you have questions now, you can contact the dealer(s) directly using the information provided below or contact CarsDirect's award-winning customer service team at 1.888.CarsDirect (1.888.227.7347) or [email protected]
For your reference, your customer transaction number is .
Tell us a little bit about yourself
Looking for dealers in your area...

By submitting this form, you agree to be contacted at the phone number you provided, which may include autodials, text messages, and/or pre-recorded calls; this consent is not a condition of purchase. Message and data rates may apply. Privacy Policy
Have feedback about this experience?
Let us know.
Tags:
2017 Compare Cars Ford Fusion News Ford News
2020
The Car Connection
See the winners »
2020
The Car Connection
See The Winner and Nominees »