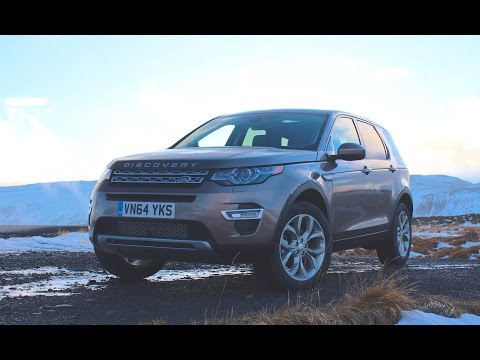 The Land Rover name has always stood for the ultimate in off-roading—but that's changed now that the stylish Evoque is one of their best-sellers.

This year Land Rover has a new SUV that applies some of the Evoque's polish to its rugged mid-size SUV. But does the new Discovery Sport have the goods to tackle rivals like the Audi Q5 and BMW X3?

From the outside it’s all about stance with the Discovery Sport. The outline may look stark and somewhat plain, but big wheels give it a planted, secure look. The clamshell hood, short front and rear overhangs, and skid plates tie it in nicely with the Range Rover lineup.

Inside, the Disco Sport is serious and businesslike. You might think it's a little too simple. We think it's more refreshing than that, straightforward and elegant. There are real knobs and buttons, and all the materials feel high quality.

Land Rover's paid close attention to making the interior of the Disco Sport more family-friendly. The front seats are nicely contoured with just the right amount of side support. You feel like you’re sitting in the Discovery Sport, not on it.

In the second row, stadium seating elevates the second and available third row above the front row. This makes things a bit less claustrophobic than rival models. The second row slides fore and aft to increase leg room or cargo room, and there’s just enough headroom. Of course, it splits and folds for increased cargo capacity.

The optional third row is even smaller than the one in some smaller vehicles. Land Rover sets the bar low and calls this a 5+2 configuration--and it's fine for small kids for very short trips, but it’s not padded and it basically destroys all cargo room when in use.

The Disco Sport knows how to dance, a little. Under the hood there's a 2.0-liter turbo four with 240 horsepower. Power is sent to all four wheels through a nine-speed automatic transmission.

The Discovery Sport has an EPA rating of 26 mpg highway and is capable of towing up to 5,500 pounds, though likely not at the same time.

Behind the wheel of the Discovery Sport, there's a good hush in the cabin. It's pretty quiet on the move, even though it launches with gusto as the torque comes on strong below 2,000 rpm. This might be the best implementation of ZF’s nine-speed automatic transmission anywhere. The electric power steering offers no real feedback but it’s nicely weighted.

Being a Land Rover you’re probably expecting this Discovery Sport to have some off-road chops, and it won’t disappoint. Land Rover’s Terrain Response System is here with a myriad of off-road modes. The approach and departure angles are impressive and there’s 8.3 inches of ground clearance with a wading depth of nearly 24 inches. P.S. We’ve tested that wading depth and it’s not for the faint of heart.

The Discovery Sport’s new, and hasn’t been crash tested yet, but Land Rover’s definitely put a priority on safety. There’s a gaggle of electronic safety aids such as Trailer Stability Assist, Tow Assist, a full roster of airbags, and active-safety features like Autonomous Emergency Braking and a lane-departure warning system.

The Discovery Sport starts from just over $37,000 and comes well equipped with Land Rover’s Terrain Response System, a rearview camera, and power folding exterior mirror. Start tacking on options such as HID headlights with LED signature lighting, power tailgate, climate-controlled front seats, and navigation, and you could be facing a sticker price of over $50,000.

So what’s the bottom line with the 2016 Land Rover Discovery Sport? It's a great blend of a go-anywhere personality and plenty of seating and space for suburban families.

For more information be sure to read our full review of the 2016 Land Rover Discovery Sport here.