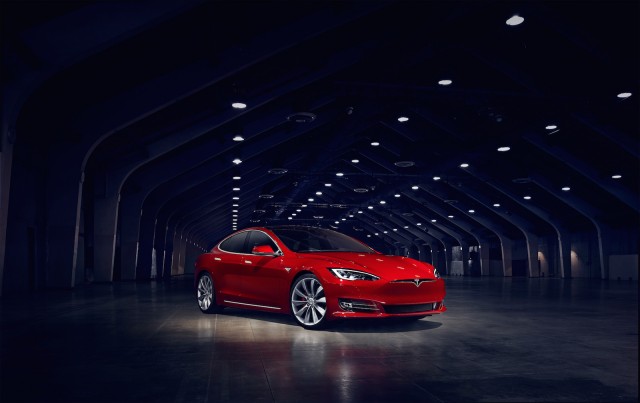 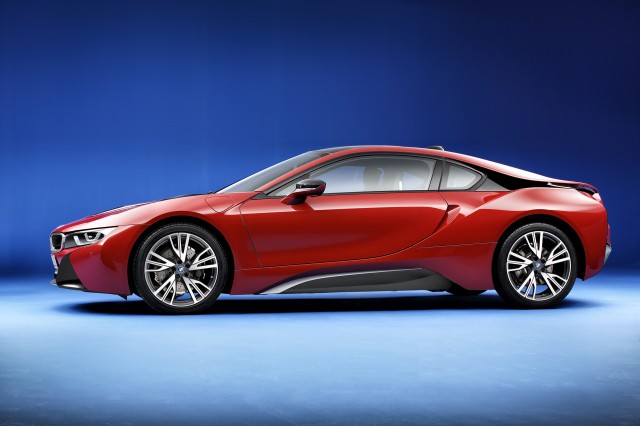 The Tesla Model S and BMW i8 both plug in to recharge their battery packs, and they can both carry six-figure price tags. They're also from two of the most forward-looking and technology-focused brands in the world.

Beyond those factors, the all-electric luxury sedan and the plug-in hybrid sport coupe are hugely different. One can carry up to seven people (if two of them are age 10 or younger), the other holds just a pair of passengers and not a whole lot of luggage. So which is right for you?

In the end, while the BMW i8 is by far the more striking car—we counted 15 separate people taking photos of it simultaneously on Rodeo Drive when we opened the winged doors—the Tesla Model S is smoother, quieter, more capacious, and somehow more impressive. Either will get you noticed, but the Tesla Model S wins the comparison for being the most practical electric car the world has yet seen. 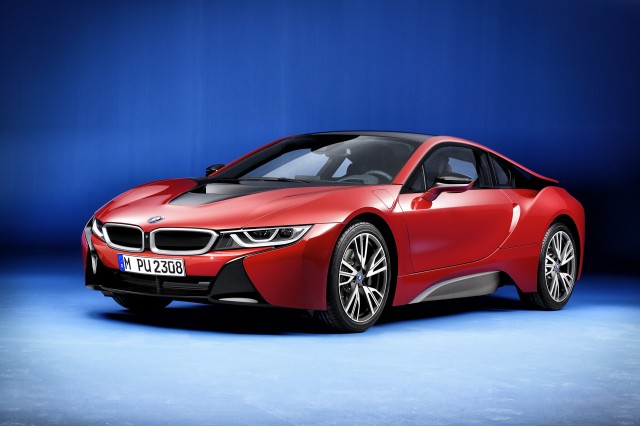 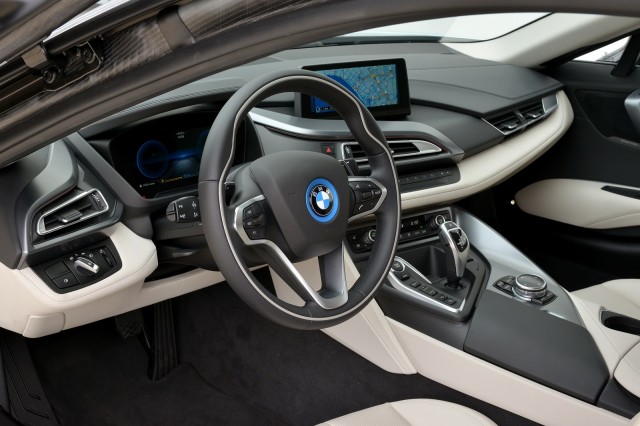 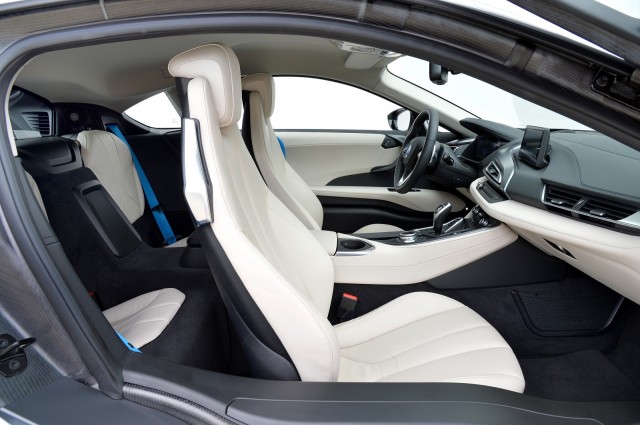 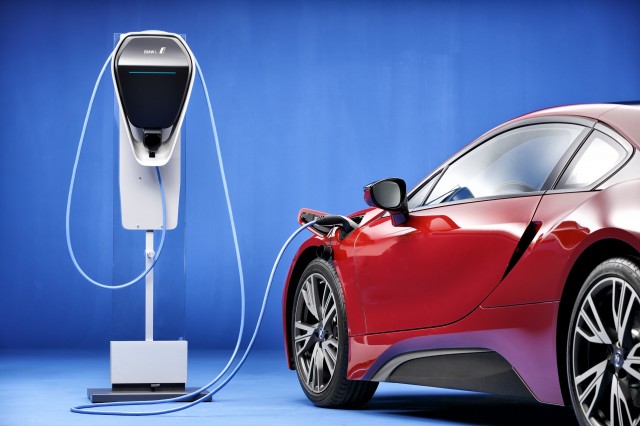 Both are good-looking vehicles. The much larger Tesla Model S is sometimes mistaken for the large Jaguar XJ sedan in its low, sleek, fastback shape. It got its first styling update in spring 2016, with a blunt front nose replacing the former black oval shape where a grille would normally sit. Though widely referred to as a luxury sedan, the Model S is actually a hatchback, with a rear liftgate that opens into a cargo compartment. Parents can fit the load bay with two rear-facing child seats—complete with four-point safety harnesses—to expand its passenger count to seven, as long as the two final occupants are under 10 or so.

But the BMW i8 is a jaw-dropping exercise in futurism. Its bird-wing doors pivot up from the windshield pillars to open the cockpit, so a pair of occupants can drop as gracefully as possible into low form-fitting seats. The characteristic BMW twin-kidney grille is actually filled with blanking plates, and the silver and blue accent color scheme denotes that it's a member of the BMW 'i' family of plug-in electric cars.

As for powertrains, the Tesla is purely a battery-electric car, with a flat, high-capacity lithium-ion battery pack under the floor stretching from axle to axle, doorsill to doorsill. Over the five-year life of the Model S, it's had a dizzying array of battery options, including 60-, 75-, 85-, 90-, and 100-kilowatt-hour capacities. Those batteries come with EPA-rated ranges of 240 to 315 miles. The ranges for each battery vary further depending on whether the car has all-wheel drive, using a larger motor on the rear axle and a smaller one between the front wheels. The presence of AWD, unlike gasoline cars, makes the Model S more, not less, efficient. The latest hot rod of the range is the Model S P100D, with a "Ludicrous" mode that gives acceleration times from 0 to 60 mph of well below 3.0 seconds—which has produced dozens of videos of stunned passengers.

The BMW's two separate and sometimes-independent powertrains make the i8 more complicated. At the back, a high-output turbocharged three-cylinder drives the rear wheels, while an electric motor up front powers the front wheels. As a result, the i8 can run on electricity alone, as a sporty hybrid, or with both operating together for maximum performance—when it becomes what engineers call a "through-the-road hybrid." The two modes of propulsion are coordinated by control software, not a mechanical connection, when they are used together for all-wheel drive and maximum performance.

The BMW i8 has the edge for faster long-distance travel—for one or two people, anyhow—because it can refill at gasoline stations as needed. But Tesla's network of Supercharger fast-charging sites has spread rapidly across the U.S. in the last three years (and globally too). Coast-to-coast trips in the Model S are eminently a reality, with 20- to 40-minute stops every 200 miles or so to recharge.

Both cars are fast, but the Tesla is the smoother, quieter, and more consistent, simply because it never switches on a combustion engine. The "D" all-wheel-drive models have superb traction, with power to each wheel modulated many times a second to ensure that no wheel ever slips—and that the more energy-efficient of the two motors is used at any one time. Like most plug-in hybrids, the i8 has different driving characteristics when it's running electrically (at lower speeds, and not under full acceleration) than when both powertrains are in use—especially in the Sport mode that uses the battery to provide added torque when demanded. 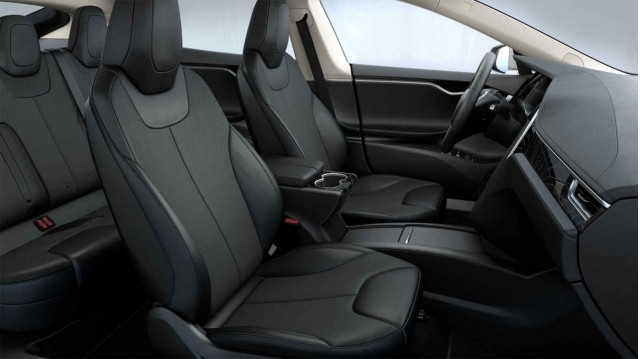 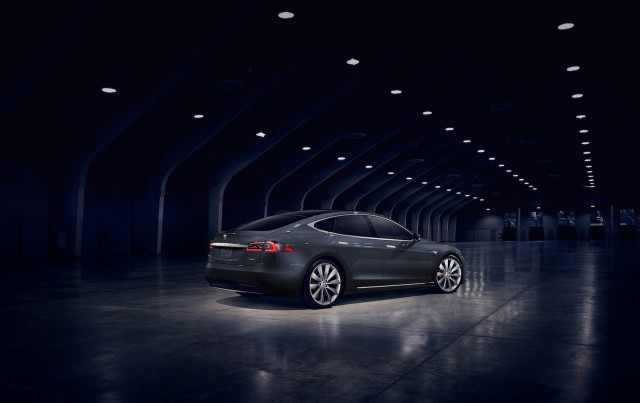 Inside, both cars are comfortable, with the BMW's two bolstered seats especially good. (We're also fond of the optional turquoise seatbelt straps, a visually compelling design feature.) The Tesla seats four adults comfortably, five acceptably, though rear outboard passengers will find the roof leaning in toward their heads more than in other, more upright luxury sedans. The finishes of its interior pretty much disguise that fact; like other cars at its price, it is trimmed with soft-touch materials, leather, brushed chrome, and other high-end materials. The Tesla's finishes, by contrast, are fine but perhaps slightly more stark.

The BMW dash will be relatively familiar to existing BMW owners. It's not nearly as radical as that of the BMW i3 electric hatchback, while the Tesla's dominant feature is huge 17-inch color vertical display occupies the center of the dash and provides a focal point for a clean, almost stark interior design. The Tesla screen's brightness, clarity, and instant response put other luxury brands' smaller screens to shame.

Tesla wins uniformly high safety scores for the Model S, though it was a little slower to fit advanced electronic safety systems like adaptive cruise control than were some of the German competitors. The company now offers both self-parking and autonomous highway driving, known as "Autopilot," neither of which the i8 provides. On the other hand, the BMW i8 offers the only laser headlights now on sale in the U.S. They're jaw-droppingly brilliant, and as close to daylight as we've seen.

The BMW i8 has not been crash-tested, and its very low volume may prevent that from happening. When the more common BMW i3 is tested, however, we'll be able to draw some lessons on how both cars' unique construction does in such tests. The i8, like the i3, combines an aluminum rolling chassis containing the battery, the running gear, and the crash structures with a body shell made of carbon-fiber-reinforced plastic (CFRP) that is both lighter and stronger than either steel or the Tesla's aluminum.

8.8
Expert Rating
There's still no direct competition for the 2016 Tesla Model S, which offers elegant design, 240 miles or more of all-electric range, and jaw-dropping acceleration in the higher-end models. It's one of a kind.
8.4
Expert Rating
The 2016 BMW i8 blends a stunning coupe design with a slew of advanced technology underneath; the plug-in hybrid powertrain, and its corresponding efficiency, may be all but irrelevant.

8.0
Expert Rating
For 2016, the big question will be whether the Model S gets the promised autonomous driving features.
Read More
8.0
Expert Rating
The 2016 BMW i8 offers a full array of modern features, including this year the astounding laser headlights.
Read More

Rear Wheel Drive Read Full Specs
All Wheel Drive Read Full Specs
Compare Free Dealer Price Quote
With competitive price quotes from multiple dealers, you will be prepared when you meet your local car dealer. Please tell us how to contact you so that dealers can compete for your business!
2016 Tesla Model S
There are no Tesla dealers in our network that are located near the ZIP code.
2016 BMW i8
There are no BMW dealers in our network that are located near the ZIP code.
Thank you!
We have sent your request for price quotes on the 2016 Tesla Model S and 2016 BMW i8 to the dealers you requested. They should be in touch shortly.
The Car Connection's dealer quote process is powered by our partner site CarsDirect.
Your request for a fast, free price quote on a 2016 Tesla Model S and 2016 BMW i8 is in process. The CarsDirect Dealer(s) listed below will contact you shortly to discuss your request and to provide a quote. If you have questions now, you can contact the dealer(s) directly using the information provided below or contact CarsDirect's award-winning customer service team at 1.888.CarsDirect (1.888.227.7347) or [email protected]
For your reference, your customer transaction number is .
Tell us a little bit about yourself
Looking for dealers in your area...

*As configured. Excludes taxes, title, license and other customary fees, such as dealer documentation fees, tire and battery disposal fees and, where applicable, finance charges. By clicking on “Get Your Price Quote Now”, you agree to our Terms of Use (including the Supplemental Terms) and Privacy Policy. You further consent to being contacted at the number you provided by CarsDirect and certain participating automotive dealerships, which may include autodials, text messages, and/or pre-recorded calls; this consent is not a condition of purchase or service. Message and data rates may apply.
Have feedback about this experience?
Let us know.
Tags:
2016 BMW i8 News BMW News Compare Cars
2021
The Car Connection
See the winners »
2021
The Car Connection
See The Winner and Nominees »