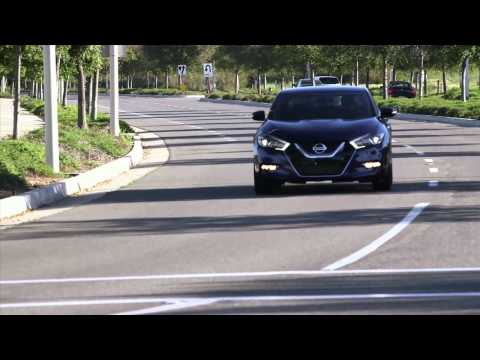 The Nissan Maxima was cocky and cool when it was young—they even called it the four-door sports car.

But for the past decade, the Maxima’s been in limbo. Is it a sport sedan with Infiniti influences, or an Altima with attitude?
The picture gets a little clearer this year, as the 2016 Maxima gets brash, brand-new looks inspired by the new Murano SUV. I went to Nashville just a few weeks ago for a first drive of the new 2016 Nissan Maxima SR, and came away impressed by its differentiation from the Altima four-door, as much by its upgraded road manners as by its dramatically reinvented style.
2016 Maxima styling

Design is critical to the Maxima's success, and this new one has lots of flair. It has a lot in common with the Murano, with a chunky, angular look that’s capped by a big grille and boomerang-shaped headlights.

The Maxima alternates between that chunky stance and a long profile as you walk around the car. It's almost two cars in one: from the front and rear, it's all sculpted armor that implies ready-to-pounce muscularity. From the rear and front quarters, the additional length versus the old Maxima and Altima (almost a couple of inches) draw it out to an almost lean look. Stare at it in profile, though, and the Murano roots come through strongly: it can look more stubby and bulky, more crossover-like.

There's also a pronounced French influence at the rear end, as if Nissan's partners at Renault had some input, and some longing admiration for a Citroen SM. A relatively high sill line kicks up at the back door, where it dovetails with the downward slope of the fastback roofline and blacked-out pillars. The overall effect makes the roof appear to float, and joins the roof and tail in a very Gallic way.

Most important, it’s nothing like the swoopy Altima. Okay, point made, Nissan.

And in case you missed the Maxima heritage--it doesn't look anything like any previous Maxima--Nissan etches "4DSC" in the headlamps and taillamps, a callback to the third-generation car that earned the nickname "four-door sports car."

Inside, it’s as different from the Altima as fraternal twins can be. The Maxima’s cockpit wraps around the driver more tightly than the Altima’s cabin, and the details say “sport sedan," from the flat-bottomed steering wheel to the glints of metallic trim across the dash. All Maximas get a large 8.0-inch touchscreen framed by simple secondary controls; it's a substantial-looking set of controls that's more adventurous than the Altima's very conservative center stack.

The Maxima craves to be different from the Altima, but there’s some mechanical overlap. The Maxima shares a 3.5-liter V-6 with the most expensive versions of Nissan’s top-selling sedan, but here it puts out a little more effort, at 300 horsepower and 261 pound-feet of torque.

This VQ V-6 is a heavily updated version of Nissan's long-running six-cylinder. In the new Maxima, Nissan's gone to lengths to damp out some engine noise, and amplify others, by using acoustic glass and by piping some engine noises into the cabin. Under full throttle, the Maxima hits the levels where some drivers will want to turn down the volume--and it gets even more assertive in the Maxima's selectable Sport mode. We'd peg 0-60 mph times in the six-second range, and point out there's a moderate amount of torque steer under full throttle. The Maxima’s still a front-wheel-drive four-door, while many of its rivals have gone at least to all-wheel drive.

Acceleration is brisk and well within the sport-sedan framework. With a power-to-weight roughly in V-6 Camaro range, the Maxima's assertive when you mat the gas. Nissan's continuously variable transmission has undergone another round of improvements for the Maxima: it's programmed with Normal and Sport modes to hold a higher engine speed when cornering, and it comes with big, long shift paddles attached to the steering column--where they should be, so you can find them no matter what angle the steering's cranked to.

The Maxima's fitted with a Drive Mode Selector that toggles gear-ratio changes, throttle, and steering weight from Normal to Sport modes. It's also programmed with simulated gears so that the action of paddle-shifting takes some control over the transmission. It's quicker to change ratios than before, but the CVT still lacks the immediacy of a well-staged eight-speed automatic--never mind a manual gearbox.

With a fully independent front strut/rear multi-link suspension, disc brakes all around, and 18- and 19-inch wheels, the Maxima acquits itself well when the road turns from flat and straight, to hilly and curvy. If you're seeking something that takes an even sharper handling tack, you'll want to spend time in the top Maxima SR, the version I drove through the Tennessee hills.

The Maxima SR has the tautest suspension setup of the range, with its own shock and stabilizer bar spec, monotube rear shocks, paddle shift controls, the bigger wheel and tire package, and available summer tires. It drops the sunroof--Nissan says for lower weight and better body rigidity--and gets a chassis damper to stop the stiffer setup from transmitting too much of the bad kind of road feel. On the Maxima SR, Nissan also tweaks the braking system so that the car slows the engine down and applies brakes to take corners better.

Equipped with all the edge the order sheet can muster, the Maxima is still just on the right side of firm. Drive a Lincoln MKZ without adaptive damping (which the Maxima also doesn't offer) and you're likely to come away more impressed with the Nissan's well-balanced ride. What's even more appreciated is the Maxima's clean tracking: recent Nissans and Infinitis with big tires are known for bump-steering their way over rough pavement, but the Maxima takes a set and keeps focus, with very little of the wandering and bump-steering that makes long interstate rides and back-country touring equally tedious.

At 192.8 inches long, and sitting on a 109.3-inch wheelbase, the 56.5-inch-high Maxima is some 1.3 inches lower and 2.2 inches longer than before, with some of the extra length going to improved front-crash protection. There's more high-strength steel devoted to crash as well, and to improving torsional rigidity--the resistance to twisting of a car body in motion. Curb weight checks in at about 3,500 pounds.

It's almost dead-on with today's Altima, which sports the same wheelbase, sits about an inch taller, and an inch shorter, while weighing in at 3,477 pounds in its heaviest, most luxurious trim.

The Altima roots are important in how the Maxima delivers enough sport-sedan space to carry four adults. In the front seat of the Maxima, there's plenty of space. It's still a family sedan underneath. There are some sharp differences from the related Altima, though. The Altima has high-density-foam seats; the Maxima's are composed of some of the same stuff, but they're more tightly tailored, with firmer side and bottom-cushion bolsters. They're a little less comfortable for longer drives than those in the Altima, but the snugger fit comes in handy when you're cooking the Maxima through the Tennessee countryside. Power front seats are standard on the Maxima in cloth or leather; heating and ventilation are standard on some trim levels.
Because the Maxima is Altima-based, it has similar proportions--which means plenty of room in the back seat. Leg and head room are very good; six-foot rear-seat passengers shouldn't have too much raging conflict with the headliner. The Maxima's avant garde styling goes a long way to mask just how much space is packaged into the rear seat. Trunk space is generous, too, and the Maxima has lots of little storage pockets and bins throughout its cabin.

Attention to detail is part of what Nissan hopes will sell the Maxima versus the Altima, and it has it. Some versions sport Alcantara trim inserts on the doors and steering wheel, even quilting on the leather seats. The cupholders are sized for small and large drinks, and there's a large pocket for holding cellphones, located right along with the USB port for charging and connecting your phone.

Standard features at the base level include a navigation system, automatic climate control, a rearview camera, pushbutton start, remote start, SiriusXM capability, Bluetooth connectivity, and an eight-way power seat for the driver and four-way power for the passenger seat.

CHECK OUT: U.S. Road Deaths Are Falling, But Here's Where They're On The Rise

The SR gets Alcantara seating inserts and aluminum sport pedals. Standard only on the SR are a few performance-oriented safety features: active trace control, which applies braking to each wheel so the car stays on the corner line as steered; active engine braking that uses the engine to slow the car to the desired speed as the driver applies the brakes; and active ride control that smooths body movement over bumps in the road.

The Maxima has luxury covered, but to get some of the latest safety gear, you’ll have to spend. All Maximas come with the usual safety features, including seat-mounted and roof-mounted side-impact airbags. But most of the available driver assists require an upcharge: forward-collision warnings, adaptive cruise control, drowsy/distracted driver alert, collision mitigation braking, blind-spot monitors, and rear cross-traffic alerts.


So what’s the bottom line with the 2016 Nissan Maxima? It's still in near-luxury limbo, but at least it has the dance moves down pat.