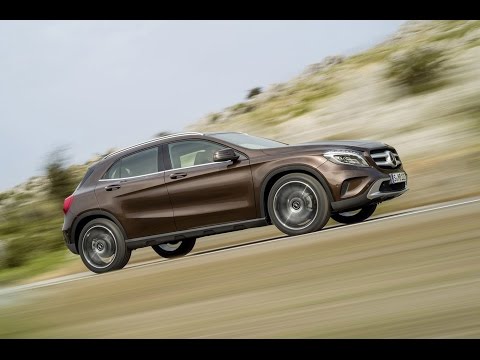 Small luxury crossovers are booming these days, and the competition’s stiff. With vehicles like the Audi Q3, BMW X1, and Buick Encore, there’s a slew of pint-sized SUV options, but Mercedes-Benz would like your attention with the new GLA-Class.

You might not know it by looking at it, but the GLA is essentially a lifted hatchback version of the swoopy CLA-Class. You know it’s a utility vehicle thanks to the eight inches of ground clearance, but the styling is more hot-hatch. While it’s not large, the GLA does carry far more presence than you’d expect for its size.

Inside the GLA you’ll find a sporty cockpit with no fewer than five oversized vents. The center console is clean and sleek, and the gauges are instantly recognizable as Mercedes fittings. Love it or hate it, the floating display screen is here on top of the dash, even though it kind of feels like an afterthought.

The front seats are comfortable with excellent backs and firm bolsters. Broader adults might find the lower cushion a bit short and narrow, but the upholstery options are all top-notch.

Under the hood of the GLA 250 you’ll find a 208-horsepower turbo four-cylinder with 258 pound-feet of torque. That power is sent to the front wheels through a seven-speed dual-clutch gearbox. For those looking to add a little go-anywhere ability, Mercedes’ 4Matic all-wheel-drive system is an option for $2,000.

Need more power? A pocket rocket version called the GLA45 AMG is available, with a turbo four pumping out 355 horsepower and 332 pound-feet of torque.

Behind the wheel the GLA is far more carlike than ruggedly sport-ute-ish. It's a lot like driving the CLA sedan, with just a touch more body roll due to the increased ride height. There’s balanced cornering here--but also some all-weather ability. We’ve taken it off-road, and it can handle more than most owners will throw at it. Drivetrain refinement is fairly good, with some laggy shifts at times, but the GLA is pretty quiet. If you just outgrew your Subaru WRX STI, well, the AMG version will be right up your alley with a nice bark to the exhaust note and the ability to hang the tail out.

While it hasn’t been crash-tested yet, a high selling point of the GLA is the high level of safety features. It starts with eight airbags and the usual electronic stability controls, but you can also opt for active safety tech such as collision-avoidance systems, automatic braking, and adaptive cruise control.

The GLA starts from just over $31,000, but the bills rack up quickly once you add on active safety options, a panoramic sunroof, and an advanced infotainment system. If you want the hot GLA45 AMG, you might get stuck with a bill for more than $60,000.

So what’s the bottom line with the 2015 Mercedes-Benz GLA-Class? It isn’t the roomiest small SUV--it's really more of an all-weather hatchback with a double shot of urban attitude.