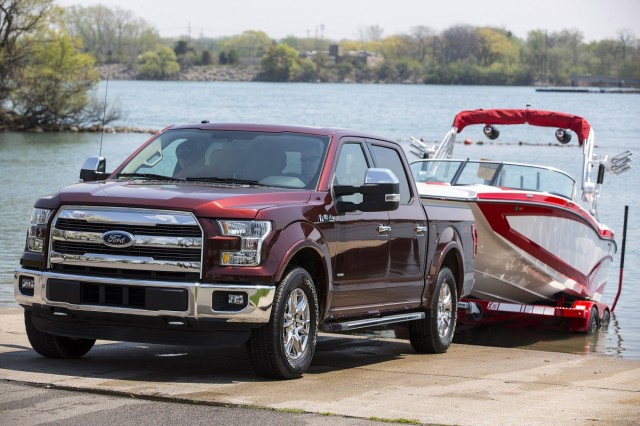 If you’ve ever had to back a vehicle and trailer up into a tight space like a driveway, loading dock, or boat launch, you know that it really isn’t as easy as it looks.

The trouble, of course, is that you don’t always turn the steering wheel the same direction to get your intended outcome, in terms of which direction the trailer goes. That can result in plenty of course correction—and moving forward again at times to get back on track if you start to jackknife.

Now Ford Motor Company [NYSE: F] has revealed a new feature, called Pro Trailer Backup Assist, that makes its debut in the 2016 Ford F-150 and could not just make the task easier but help you save face when family, friends, or coworkers are watching your trailer-reversing prowess (or lack thereof).

With the new feature, you simply rotate the knob counterclockwise to have the trailer go to the left, or turn it clockwise to bring the trailer to the right—with the system taking over steering of the vehicle—all while you modulate the steering and brakes. The system has the smarts to figure out angles between vehicle and trailer and work out which you should do. It may, for instance, limit vehicle speed to get the best results for what’s ordered up through the knob.

Cuts fuss in backing up with trailers—even for experienced towers In short, it lets the driver steer the trailer through the knob, while the system does whatever it needs to do with the vehicle to produce that result. Ford claims that it can even be of help for experienced trailer-towers.

It works through inputs from cameras, in a system that Ford says has been nearly a decade in the making. The automaker has earned five patents for the technology, with ten more pending.

MORE: Get all the details in our full 2016 Honda Pilot review

Ford notes that it was the first automaker in this segment of the market to incorporate trailer sway control, in 2009. That system uses the individual wheel brakes to proactively counteract any sway as it begins to develop, detected in subtle movements between the vehicle and trailer.

The company was also the first with a dynamic hitch assist system, brought to market in the 2015 Ford F-150 and using a dynamic line that changes with steering-wheel angle, helping the driver line up the hitch and trailer without a separate spotter.

That feature, it turns out, was only a tease of the capability that’s introduced with Pro Trailer Backup Assist in the 2016 Ford F-150.

You really need to see this feature to fully understand it—and to understand how it could save you from embarrassment those few times a year you might back a trailer up in close quarters. See the video above for a show of how it works.