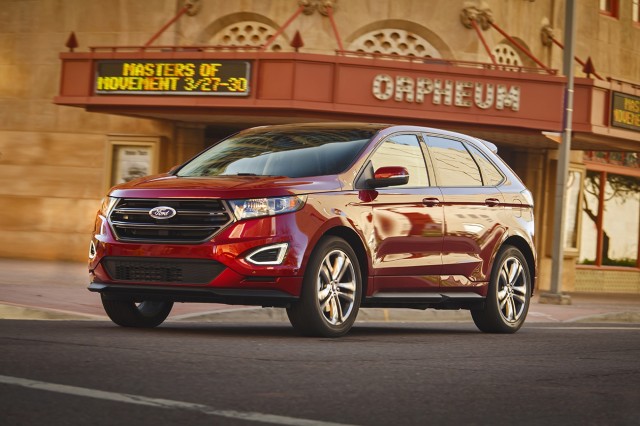 In Insurance Institute for Highway Safety (IIHS) testing, the 2015 Edge earned top 'good' ratings in four out of five IIHS tests, with the only blemish being an 'acceptable' result in the small overlap front crash test.

The IIHS notes that the Edge doesn't qualify for the agency's Top Safety Pick+ tier, as it doesn't offer a front crash prevention system with automatic braking—a feature that Ford has hinted might be on the way in 2016, even though the current model does offer a brake support feature with its Forward Collision Warning (FCW) system.

The 2015 Edge does earn a ‘basic’ front crash prevention rating, when equipped with the optional Adaptive Cruise Control and FCW systems.

The federal government earlier this year released full New Car Assessment Program (NCAP) results for the 2015 Edge, and they’re far better than those of last year’s model. It now achieves five stars overall, as well as in the frontal crash and side crash categories.

That’s quite the improvement over the previous-generation (2014 and earlier) Edge, which earned a four-star overall rating, pulled down by a particularly worrisome three-star frontal result.

There were no tricks involved in this rapid change; the 2015 Edge has a completely new structure that was developed with some components from the current, highly rated Ford Fusion. It’s also loaded with safety features, like active front-passenger knee bags and inflatable rear belts.

The 2016 Ford Edge is expected to carry over with a robust safety-feature set—although new Sync 3 connectivity might be a safety improvement to some. Top trim levels include a 180-degree front camera system, a rearview camera, a blind-spot warning system with cross-traffic alert, that collision warning with brake support system, and a lane-keeping system; and there’s an available Lane Keep Assist feature that will apply steering force to help keep you in your lane.

In a first drive of the 2015 Ford Edge earlier this spring, we appreciated that system as it allows you not only to set the level of warning when you stray from a lane in a moment of inattention, but also the level of intervention of the system in steering you back in a lane. It’s only as much of a nanny as you want.

See our full review of the 2015 Ford Edge for more, including detail on features, accommodations, performance and ride for this much-improved crossover wagon.