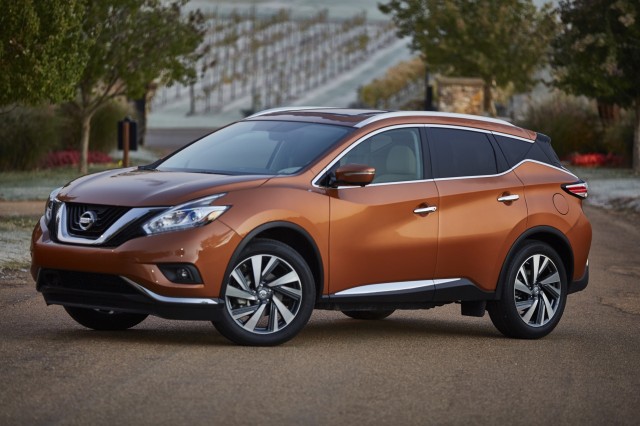 The redesigned 2015 Nissan Murano has earned top ‘good’ results from the Insurance Institute for Highway Safety (IIHS) in the group’s latest release of crash-test ratings.

Among a group of seven crossover and SUV models recently tested, the Murano was the top-performing vehicle. The 2015 Murano earns top ‘good’ ratings in every other crash test category and subcategory from the agency, and earns the IIHS Top Safety Pick+ accolade for 2015.

ALSO SEE: Selling A Car On Craigslist? Watch Out For This New Scam

That also includes a top ‘superior’ rating for front crash prevention, contingent on the optional Forward Emergency Braking and Forward Collision Warning systems, part of the optional Technology Package. However the Murano doesn't earn top five-star federal results (there are other crossovers that do), so we can't call it the safest crossover by the ratings. It's close, though; and it earns a 9 out of 10 for Safety in our 2015 Nissan Murano full review.

While the IIHS result is a triumph for Nissan, which has been bolstering its safety reputation with some of its latest models, the three lowest-performing models tested in this group were from Fiat Chrysler Automobiles (FCA).

The Jeep Cherokee and Dodge Durango both achieved only ‘marginal’ ratings for small overlap front crash protection, while the Dodge Journey landed a bottom-of-the-barrel ‘poor’ rating in that category.

The Jeep Grand Cherokee, which is closely related to the (longer) Dodge Durango, also has had issues with the small overlap test—and a corresponding ‘marginal’ rating in that test.

The small overlap frontal test, which was announced in 2010 and introduced as part of testing in 2012, replicates what happens when just 25 percent of the vehicle’s front end collides at 40 mph with another vehicle or a rigid barrier like a tree or utility pole. Since it’s off-center, it’s a challenge for safety engineers, to have the structure absorb crash energy without allowing distortion of the passenger space.

The IIHS notes that the Journey was by a significant amount the worst performer in this batch of vehicles, and “a classic example of poor small overlap protection.” The group points to how major intrusion tore into the crash-test dummy’s lower leg, adding to potential injuries to the hip, knee, and lower leg, as well as an airbag that deployed to the side and a side-curtain bag that didn’t deploy at all.

"Chrysler, Dodge and Jeep have had some successes with redesigned models, but they haven't done much in the way of interim improvements,” said IIHS Chief Research Officer David Zuby. “As a result, they still have many models that rate poor or marginal."

Chrysler did have one unexpected bright spot in this test. Four-door versions of the Jeep Wrangler, the Wrangler Unlimited as it’s called, did better, with a ‘good’ small overlap rating. Yet those results are bittersweet as it’s already one of the lowest-rated SUVs for safety otherwise, with ‘marginal’ ratings for side and rear crashes keep it from being recommended by the IIHS.

The 2015 Hyundai Santa Fe was also tested in this group; it also earned only a ‘marginal’ small overlap rating but otherwise has good scores from the IIHS in its shorter Santa Fe Sport form.

Separately, the Ford Flex was also tested as part of this latest round of testing. It earned an ‘acceptable’ rating in the small-overlap test—with structural issues bringing the rating down—but it’s worth noting that it achieved top marks in all the injury measures, and this model remains a Top Safety Pick.