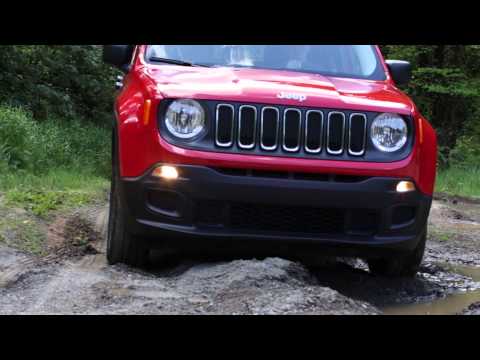 The new wave of small SUVs is here. Even if you haven't seen the new Honda HR-V, Mazda CX-3, or Fiat 500X yet, you've probably seen the toughest-looking baby ute of them all--the Jeep Renegade.

The Renegade is Jeep's smallest, most fuel-efficient model yet. But is it worthy of the Jeep badge?

From the outside, the Renegade easily makes the Jeep cut. It’s boxy, rugged-looking, cheeky and fun. It doesn't mess up the seven-slot grille and round headlights like the bigger Cherokee does, either.

Inside, it’s a cross between tough mudder and Playskool chic, with durable-looking trim and oversized controls. You’ll notice quickly that this is a wide, spacious cabin for its size. The front seats are nicely bolstered and are quite comfortable. The cockpit has lots of useful bins and cubbies for all your gear.

In the rear seat, it's a tighter fit. Two adults will be fine if the front seat occupants are willing to adjust a bit, and head and shoulder room are just fine.

Hauling stuff? You’ll find 18.5 cubic feet of cargo space back here, enough for tents and bedrolls and Costco runs, too. The rear seats fold nearly flat, and so does the front passenger seat. Surfboard hauling? No problem.

Performance is where you'll uncover some mainstream appeal in the Renegade's resume. It gets its power from either a 1.4-liter, 160-horsepower turbo four, or from a 180-horsepower 2.4-liter four. The turbo four lets you #GiveAShift with a six-speed manual transmission. The bigger four comes only with a nine-speed automatic that has some lumpy shifts, just like it does on all other Chryslers that use it.

Fuel economy wise, it doesn’t matter which engine you choose. The EPA ratings are as high as 31 mpg highway, and 27 mpg combined.

The Renegade is normally a front-driver, but four-wheel drive is an option. The Trailhawk model has a serious off-road setup with a two-speed transfer case and locking rear differential along with a low-speed crawl ratio of 20:1. It has some impressive off-road ability, and its size is a real asset when you're trying to wedge between trees and rocks without a scratch.

But let's be honest, the Renegade is most likely going to be a city dweller, doing things like getting coffee and driving to work. For what's basically a tall box, the Renegade is quiet and maneuverable, with a somewhat firm ride and a tight 36-foot turning circle. The steering doesn’t provide much feedback, but this is no sports car. In front-wheel-drive form, the Renegade's a tidy little hatchback that just happens to look the Jeep part.

The Renegade hasn’t been crash-tested yet. A rearview camera is standard on almost all models, and a forward-collision warning system is an option.

The Renegade starts from about $19,000. The base Sport model doesn't come with air conditioning or a rearview camera, so you'll probably want to shop the Latitude trim level and above. More expensive versions add leather, wireless Internet, a touchscreen infotainment system, and our favorite, these removable roof panels. Load it up and the Renegade's sticker jumps to more than $30,000.

So what’s the bottom line with the 2015 Jeep Renegade? It’s a smart blend of ruggedness and livability that works in crowded cities as well as it does on muddy roads.