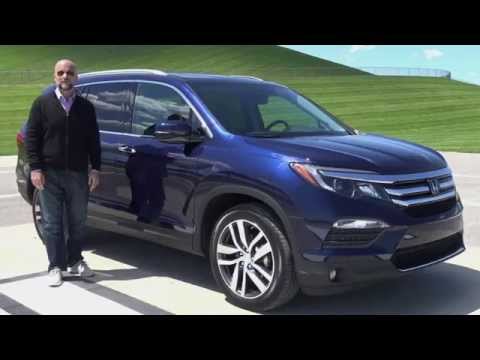 We’ve been fans of the Honda Pilot since it was brand-new, back in 2003. The first one was a big hit—but the next one had a rugged SUV look that was out of step with its on-road talents.

There’s a new Pilot for 2016, and it’s making a big U-turn. But is it big enough to pass the Ford Explorer and Toyota Highlander? We found out during our first drive of the 2016 Honda Pilot.

MORE: Get all the details in our full 2016 Honda Pilot review

The Pilot is Honda’s biggest crossover SUV. It has three rows of seats, a big V-6 with available all-wheel drive. That makes it a rival for wagons like the Nissan Pathfinder, Chevy Traverse, Toyota Highlander, and the Ford Explorer.

The Pilot might be the freshest, and prettiest, of them all. For 2016 it’s adopted a much more rounded shape that’s softer and far more appealing than before. The side view is elegant, with gentle sculpting and creases, and a beautiful balance of glass to metal. It’s as if the Chrysler Pacifica and Subaru Forester got together and had some really pretty babies.

Inside, the new Pilot couldn’t be more different from the old blocky, plasticky design. It’s very well finished, with elements from the current Accord, and some touches from the CR-V. On some versions, there’s a huge panoramic roof that opens up the cabin to a flood of natural light.

The Pilot’s known for its versatility, and that’s in full force in this new version. Three rows of seats have space for up to eight passengers. The front seats are just about ideally shaped, and with step-in height about an inch lower than before, the Pilot is an even better bet for smaller or older drivers.

The middle row is adult-friendly, and for the first time, you can get a version with two captain’s chairs and a pass-through. The seat reclines for long trips and has its own tray table and cup holders.

In the back, the third-row seat is accessed by folding forward the second-row seat—at the push of a button, a nice touch. Step-in room is slim, but the back seat has enough space for two adults with a surprising amount of head and leg room. The seat is close to the floor so leg support isn’t great—but the fact that big people can sit back here makes the Pilot one of the most useful people haulers around.

Cargo space is abundant in the Pilot. There are cupholders everywhere, and a console big enough for an iPad. The third row folds down for a flat cargo floor. There’s a reversible cargo panel for dirty stuff like soccer cleats and beach chairs—and this cargo well behind the third row can hold an 82-quart cooler. Capri Sun for everyone!

Soft-touch surfaces and styling details that have transformed this Pilot. It’s much, much more luxurious than before, even in base trims—so much so, we think Elite versions compare very well against vehicles like the Buick Enclave, even the closely related Acura MDX.

Performance with the Pilot’s updated V-6 is strong. With 280 horsepower, it’s paired with either a six-speed automatic or a new nine-speed on Elite models. Front-wheel drive is standard, all-wheel drive is an option—and the Pilot can be outfitted with a traction management system that can help it pull out of mud pits or snow with ease. The Pilot also will tow up to 5000 pounds.

The Pilot pulls strongly with its new nine-speed automatic. There's some surging as its downshifts to a stop but in sport mode it's an energetic performer with a great engine note.

I don't think there's a plusher ride or more relaxed steering in this size class. The Pilot feels mature and luxurious at the wheel. The all-wheel-drive system has torque vectoring that lets it turn in more sharply to corners--the quicker cornering is at odds with the softly sprung ride delivered by the plushest version with 20-inch wheels. It's unusual, since larger wheels and tires usually corrupt a soft ride. This could be the result of the early-prototype tuning on the cars made available to us for testing. It's easy to get used to, --but you might be just as happy with the firmer-riding front-drive version with the standard 18-inch wheels and tires.

Fuel economy is as high as 23 miles per gallon combined, among the best in class thanks to a 300-pound weight loss, cylinder-deactivation technology, and stop/start.

Safety ratings should be best in class. Honda is aiming for Top Safety Pick+ ratings from the IIHS. The Pilot offers blind-spot monitors, a LaneWatch camera with a wide view down the right side of the car, a multi-rear-view camera, and forward-collision warnings with automatic braking.

Standard features include Bluetooth with audio streaming, touchscreen audio, power features, cruise control, and air conditioning. As you move up in price, you can add satellite radio, leather trim, a DVD entertainment system, and heated and ventilated front seats.

So what’s the bottom line with the 2016 Honda Pilot? It's a smooth, capable family wagon that raises the bar for refinement.