J.D. Power: Younger Drivers Will Pay Nearly Twice As Much For In-Car Tech Than Older Shoppers 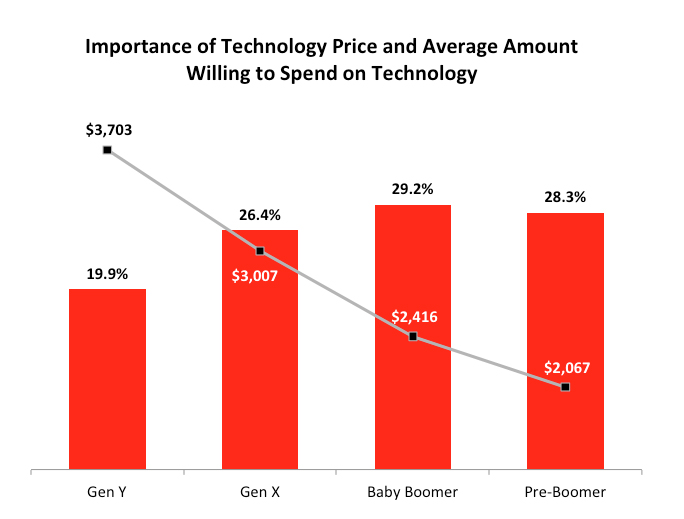 J.D. Power has released its 2015 U.S. Tech Choice Study, which surveys consumers to gauge their opinions on in-car technology. As interesting as the study is, though, we can't say that it's full of surprises.

To gather data for the study, Power polled over 5,300 consumers who've purchased or leased new vehicles within the past five years. After the surveys had been tabulated, researchers found that when it comes to car tech, safety features rise to the top of shoppers' must-have lists.

In fact, respondents' three favorite features were collision avoidance/mitigation systems, blind spot detection, and night vision. (All of which, we should point out, are technological stepping stones along the path to fully autonomous cars.) Rounding out the top five were camera rearview mirrors (which are slightly more intuitive for many drivers to use than screens embedded in center stacks) and self-healing paint.

The sole surprise in these findings is that infotainment technology scored lower than expected. Even two of the most-hyped offerings in recent years -- Apple's CarPlay and Android Auto -- generated what J.D. Power's Kristin Kolodge described as "lukewarm interest". Those attitudes could change, though, as CarPlay and Android Auto become more widely available and appreciated.

That said, infotainment wasn't all the way at the bottom of shoppers' lists. That spot was reserved for fuel efficient tech. According to Kolodge, "[T]here is very little interest in energy efficiency technologies such as active shutter grille vents and solar glass roofs. Owners aren’t as enthusiastic about having these technologies in their next vehicle because of other efforts automakers are taking to improve fuel economy, as well as relatively low fuel prices at the present time." Navigation and health technologies also fared poorly among respondents.

To no one's astonishment, tech-friendly Millennials said they'd be willing to pay far more than their parents or grandparents for in-car technology. As you can see from the chart above, Gen Y is prepared to pay an average of $3,703 for high-tech features, while their older siblings in Gen X said they'd pony up $3,007. Boomers committed to $2,416, while Pre-Boomers capped their tech spending at around $2,067.

Though it might sound from this study as if in-car tech isn't too important, Power notes that it plays an increasing central role in the consideration process. What's more, if shoppers shell out for it and it doesn't work properly, it can cause serious problems. As Kolodge concludes, [T]he auto industry is standing on its head to keep technology up to consumers’ new standards. Those who haven’t done so have seen negative feedback from consumers."

To which we say: no kidding.