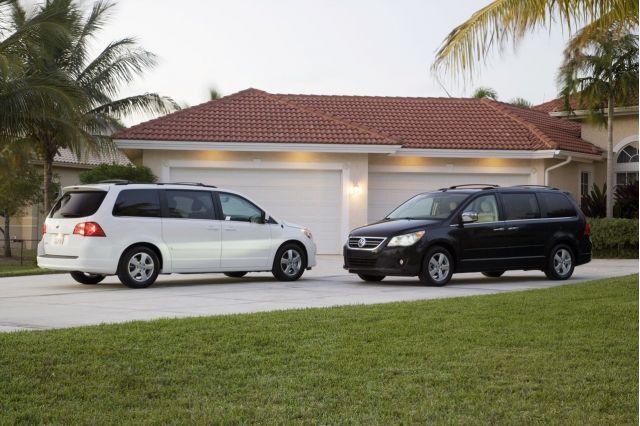 Volkswagen has issued a recall for 2009 and 2010 models of the Routan minivan. According to the National Highway Traffic Safety Administration, the vehicle may suffer from the same kind of ignition switch flaws that spawned massive recalls at General Motors and other automakers last year.

In a NHTSA bulletin (PDF), the agency says that rough roads, heavy keychains, and other factors may cause the Routan's key to rotate out of the "ON" position while the vehicle is in motion. That, in turn, is pretty bad news, because as NHTSA explains:

"If the ignition key inadvertently moves into the OFF or ACCESSORY position, the engine will turn off, which will then depower various key safety systems including, but not limited to, air bags, power steering, and power braking. Loss of functionality of these systems may increase the risk of crash and/or increase the risk of injury in the event of a crash."

NHTSA goes on to say that until owners have their vehicles repaired, they should remove the ignition key from their key rings.

Unfortunately, both the 2009 and 2010 Routan have already been recalled for this very problem. The 2010 model was recalled in 2011, and the 2009 was recalled in 2014. It appears that 2010 models that received a completely new ignition switch during the previous recall aren't subject to this one, but 2009 models are.

Volkswagen says that it will begin mailing recall notices to owners this month. After receiving those notices, Routan owners will be able to take their vehicles to a Volkswagen dealer, who will replace the ignition switch and key fob, free of charge.