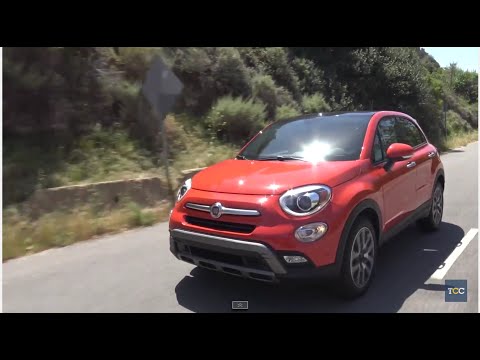 Fiat kick-started itself here in the U.S. with a pair of European twins--the tiny 500 hatchback and the bigger 500L. Now it has a real chance to win over American car buyers with its first small crossover SUV.

Will the new 500X be big and bold enough to tackle the Jeep Renegade and Honda HR-V? We found some answers in our first drive of the 2016 Fiat 500X.

The 500X is brand-new this year. It shares some running gear with the new Jeep Renegade, but Fiat isn’t pitching its off-road credentials. Instead, it’s more of an urban runner with small-car virtues tucked into a taller, roomier footprint.

ALSO SEE: Young Men Don’t Get The Most Speeding Tickets: Who Does Will Surprise You

The 500X's Audi-like, aero-smooth shape was drawn in Italy. It incorporates enough of the cute cues from the 500 hatchback, without the weird transitions and tack-ons of the bigger 500L. It's a more mature-looking vehicle than either of its cousins, but it touches its brand home base with the mustache-and-badge face, a clamshell hood, and these twin headlamps.

Trekking and Trekking Plus versions have their own front and rear end designs, for a slightly more rugged look.

Inside, Fiat has left things neat and clean, with big, round gauges matching up with big, round climate controls, and available body-color trim, all topped by a moderately sized LCD screen factored into the dash for infotainment and camera displays.

American versions of the 500X will come with a choice between two engines. The smaller-displacement 1.4-liter turbo four makes 160 horsepower coupled to a six-speed manual transmission. With the bigger 2.4-liter four-cylinder engine, the 500X makes 180 hp and adopts a nine-speed automatic. All-wheel drive is an option and the 500X has almost eight inches of maximum ground clearance.

The 500X also can be fitted with a set of adaptive driving controls; drivers can choose between Auto, Sport and Traction+ modes to vary throttle input, transmission shift speed, steering feel, and stability-control programming to suit the driving conditions.

Almost all versions will come with bigger four. It's pretty smooth in this application and this version of the nine-speed automatic shifts better than in some other Chryslers, though we still noticed its tendency to hold gears too long and to shift too abruptly on occasion. More of a bother: It's very slow to downshift in normal mode. To get it to respond at all to a firm foot on the gas, you need to be in sport mode, and even then, there are no paddle shift controls for manual gear choices.

The 500x has a firm ride and quick steering. Brake feel is probably the best of all the driving inputs. In all, the 500X is fun and engaging, much more so than the clumsy 500L.

Fuel economy should be in line with the Jeep Renegade, with EPA combined numbers in the 25- to 27-mpg range. That's significantly lower than the Honda HR-V's best of 31 mpg combined.

The 500x is some five inches shorter than the 500L but about an inch wider. In front the 500X seats are pretty firm and have lots of lumbar support. Knee and shoulder room are good.

In the back seat, the 500X isn't as big or as useful as the Honda HR-V. There's less head room, the seats don't fold down quite flat, and there's no fold-away Magic Seat. In terms of raw storage space, the 500X has an ample 18.5 cubic feet of space behind the second row, and 50.8 cubic feet behind the front seats.

As for safety, the 500X has seven airbags, stability control and hill-start assist. Options include forward-collision-warning and lane-departure-warning systems; blind-spot monitors; and a rearview camera.

Other features include an audio system with a small-ish touchscreen interface; Bluetooth with audio streaming; pushbutton start; navigation; and heated front seats and a heated steering wheel. Leather is available, though on our test vehicle, the "tobacco" shade veered a little to close to classic Naugahyde for our taste.

Base prices start from about $20,000 for the base Pop version with the smaller engine, and rise to $27,100 Trekking Plus, which gets the bigger four-cylinder standard along with features like navigation.

So what's the bottom line with the 2016 Fiat 500X? For fuel economy and function, other small SUVs may be a better bet. But if you want a pinch of style, look toward Italy.