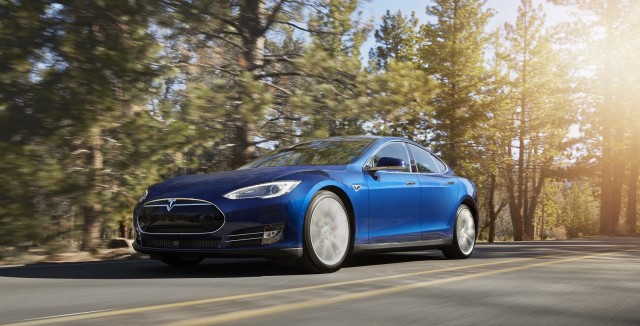 In the rarified world of high-dollar, luxury sport sedans, two of the very hottest options are the Porsche Panamera and the Tesla Model S. For those with a bent toward supercar-like performance, each offers blinding speed in a luxurious four-door cocoon.

The Tesla Model S was the first sedan from the California electric-car maker. It's not only fast, good-looking, and exceptionally smooth and quiet, but also offers the instant technology allure of being an all-electric sedan. You might say it’s a car of the future that you can buy today.

The Panamera too was Porsche's first-ever sedan, built as much for growing markets like China as for the Autobahns. It's done well in North America as well, in part because it drives like a Porsche should--even if it's a much larger vehicle than the lithe rear-engined sports cars the German brand made its reputation on.

Before Tesla, no one thought of electric cars and rocket-like acceleration together. But the 2014 arrival of the all-wheel-drive Model S P85D version changed all that, as dozens of YouTube videos will attest. The shots of stunned passengers being flung at the horizon in silence are always good for a laugh, and the P85D was tested at just 3.1 seconds for 0-to-60-mph acceleration. That required invoking its very highest performance mode, appropriate named "Insane."

But the (literally) breathtaking acceleration of the Model S got even quicker in July 2015, when Tesla slightly boosted the capacity of its largest battery pack--from 85 to 90 kilowatt-hours--and introduced some higher-performance components that eliminated prior limitations on power delivery that could have damaged the car. The new P90D version has its own, even faster, performance mode--titled "Ludicrous," seemingly in a nod to the Mel Brooks spoof classic Spaceballs.

The P90D will accelerate from 0 to 60 mph in a mere 2.8 seconds, which makes the otherwise stunning 3.6 seconds of the Panamera Turbo S seem a relative eternity. And the Tesla’s instant-on torque makes the difference in acceleration feel even greater than it is.

Turn the page to top speeds, however, and the Porsche walks away with the show. Recent updates raised the Model S speed limit to 155 mph for the P85D and other variants, but even the slowest Panamera handily tops 160 mph--and the fastest Porsche sedan is good for 192 mph.

Both cars offer all-wheel drive, so they're fine in bad weather--though the Porsche's AWD system can enhance performance and handling, too. Here the Porsche takes the trophy, handling like a much smaller sports car, with more driver-engaging feel from the wheel, pedals, and seat. The Model S is very fast; the Panamera is very good and very fast.

It's pointless here to talk about gas mileage: Panamera owners likely don't care, and Tesla drivers smirk at gas stations as they head for Tesla's growing network of Supercharager DC fast-charging sites. Likewise, horsepower and torque aren't the telling figures; instead, it's the result of those numbers that matters.

Neither the Tesla Model S nor the Porsche Panamera is all about performance or outright pace, however: they have four doors, after all. Here, the Panamera runs away with the show, at least for those who aren’t completely overawed by the Model S’s huge touchscreen control system/display.

Materials, space, ergonomics, features, and functionality in the Panamera are all somewhere between just as good and far superior to the Model S—and that’s before you climb into the back seat. Where the Model S offers enough space for adults, the Panamera has ample space—and an Executive long-wheelbase option for those who require (or desire) limo-like space in a very, very fast car. The Panamera leverages not just Porsche's much longer experience with and resources for vehicle development, but advances in technology and features found throughout the Volkswagen Group--and those economies of scale and of refinement make themselves known in everything from the feel of the leather to the quality of the switches to the navigation's menus.

That leaves styling, and here, we have an unquestionable win for the Tesla. Sure, the Panamera has evolved to wear its slightly hump-backed look more gracefully over the years, but it's still anything but an inherently beautiful shape. The Model S, on the other hand, is considered by many to be a sort of rolling sculpture, and for good reason: its curves, its proportions, and its details just work. There's something elementally satisfying about the Model S's shape.

At the end of the day, we're back where we started: both the Model S and Porsche Panamera are fantastic buys in a very competitive segment.

If you prefer the smooth, quiet calm of electric motoring to gas-scented performance, you'll choose the Model S; and you'll do the same if you're an aesthete first, a driver second. If you're looking for more room, more refinement, or a more satisfying driving experience, however, the Panamera is your pick.

8.4
Expert Rating
The 2015 Porsche Panamera keeps delivering its phenomenal balance of utility, luxury, and performance.
8.8
Expert Rating
The 2015 Tesla Model S has no direct competition; the electric luxury hatchback is the benchmark among its kind in a market with more than 20 plug-in models. It's likely the most advanced car on the planet.

8.0
Expert Rating
The Panamera range offers most of the 911's sporty fun on the street, while greatly expanding comfort, luxury, and practicality.
Read More
10
Expert Rating
With the addition of the astounding P85D all-wheel-drive performance model, the 2015 Tesla Model S goes from fast to furious.
Read More

9.0
Expert Rating
The Executive model's roomy rear seat expands the already comfortable and spacious cabin, while Porsche's high-tech luxury suits the Panamera's character.
Read More
8.0
Expert Rating
The 2015 Tesla Model S is smooth, quiet, and well put together, though you can ignore the seven-seat claim--the last two are only for kids.
Read More

9.0
Expert Rating
It may lack some of the ultra-high-tech features of the executive sedan competition, but the Porsche Panamera is still well-equipped and luxurious.
Read More
8.0
Expert Rating
The 2015 Tesla Model S has few lavish luxury features, but the models and options are well thought-out.
Read More

7.0
Expert Rating
The Porsche Panamera's gas mileage is impressive in the context of performance and luxury, but the greenest option is clearly the S E Hybrid.
Read More
10
Expert Rating
Running solely on electricity, the 2015 Tesla Model S and its Supercharger network bring the zero-emission future to your driveway.
Read More

Rear Wheel Drive Read Full Specs
Rear Wheel Drive Read Full Specs
Compare Free Dealer Price Quote
With competitive price quotes from multiple dealers, you will be prepared when you meet your local car dealer. Please tell us how to contact you so that dealers can compete for your business!
2022 Porsche Panamera
There are no Porsche dealers in our network that are located near the ZIP code.
2015 Tesla Model S
Browse Used Listings
in your area

Thank you!
We have sent your request for price quotes on the 2022 Porsche Panamera and 2015 Tesla Model S to the dealers you requested. They should be in touch shortly.
The Car Connection's dealer quote process is powered by our partner site CarsDirect.
Your request for a fast, free price quote on a 2022 Porsche Panamera and 2015 Tesla Model S is in process. The CarsDirect Dealer(s) listed below will contact you shortly to discuss your request and to provide a quote. If you have questions now, you can contact the dealer(s) directly using the information provided below or contact CarsDirect's award-winning customer service team at 1.888.CarsDirect (1.888.227.7347) or [email protected]
For your reference, your customer transaction number is .
Tell us a little bit about yourself
Looking for dealers in your area...

*As configured. Excludes taxes, title, license and other customary fees, such as dealer documentation fees, tire and battery disposal fees and, where applicable, finance charges. By clicking on “Get Your Price Quote Now”, you agree to our Terms of Use (including the Supplemental Terms) and Privacy Policy. You further consent to being contacted at the number you provided by CarsDirect and certain participating automotive dealerships, which may include autodials, text messages, and/or pre-recorded calls; this consent is not a condition of purchase or service. Message and data rates may apply.
Have feedback about this experience?
Let us know.
Tags:
2015 Compare Cars Tesla Model S News Tesla News
2022
The Car Connection
See the winners »
2022
The Car Connection
See The Winner and Nominees »