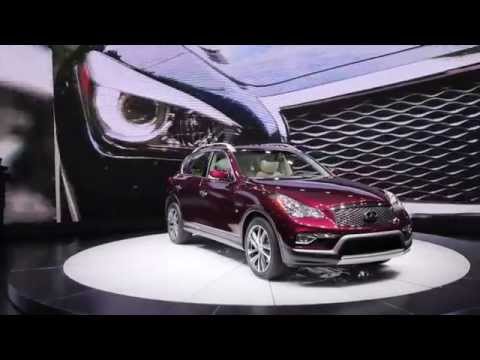 Look familiar? This luxury crossover’s been with us since 2007, but it’s been through a few names changes on its way to the 2015 New York Auto Show.

The QX50 isn’t brand-new, not exactly. In its original form, it was launched back in 2007 as the EX35. Then, after an upgrade in displacement, it was called the EX37. Then in 2014 Infiniti renamed all its vehicles, with a QX for all its crossover SUVs.

Today that gets us the updated QX50, which goes a long way to fix one of its bigger shortcomings—its back seat space. For 2016, the QX50 comes in a new body style—one with a wheelbase some 3.2 inches longer than last year’s model. It’s a vehicle originally built specifically for China.

It is a little hard to tell how much has changed, though. You’ll have to look closely to spot the updates, but some tweaks have been made—like new bumpers, mirrors, and a new grille.

The QX50’s drivetrain is the same as before. It’s powered by a a 325-horsepower, 3.7-liter V-6. Power is sent to the wheels through a seven-speed automatic transmission.