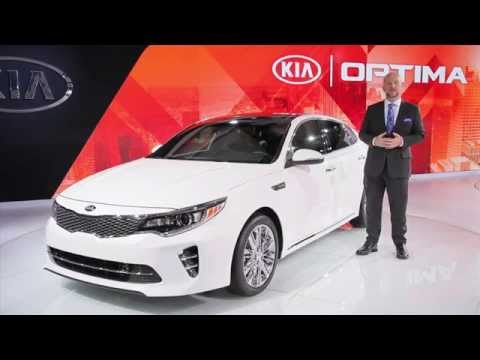 The Kia Optima has been a surprise—well, maybe not to Kia, but to the rest of the world. In the past it was an anonymous four-door forever in the shadow of the Camry and Accord. In 2011, a complete rethink made it one of the best-looking values in the family four-door class.

This year, Kia’s capturing some of those gains in the form of a brand-new Optima, coming this year as a 2016 model, and seen for the first time at the New York auto show.

The Optima has a lot of good looking rivals—cars like the Fusion, Sonata, and Mazda 6. It’s still a great-looking vehicle, but this time the emphasis is on refining its shape. The themes are similar—a long metallic strip defines the rear roofline, and couples to a sharp upturn in the window line, and there’s a wide mesh grille up front. The cockpit’s been cleaned up, with a more unified design and better control layouts. Kia says it’s all about better balance—and we think they’re right.

The 2016 Optima is marginally longer, taller and wider than before, and the wheelbase has been extended slightly from the previous 110.0 inches to 110.4 inches. Kia promises more interior space, but in truth, it doesn’t feel any bigger—but the Optima already had good space in its corner.

This year, the Optima will come with a choice of three powertrains. The carry-overs include a 185-horsepower four-cylinder and a 247-horsepower 2.0-liter turbo four. New to the lineup is a 178-horsepower turbo four teamed to a seven-speed dual-clutch transmission, a combination that promises EPA highway fuel economy in the 37-mile-per-gallon range.

Kia says the Georgia-built Optima’s handling is improved, too, thanks to new suspension tuning and steering geometry.

On the safety front, the Optima now will offer a surround-view camera system, as well as adaptive cruise control, blind-spot monitors, and automatic braking. Other new features include a 630-watt audio system and available Android Auto and Apple CarPlay interfaces.

Prices shouldn’t be too different from today’s Optima—with base prices ranging from the low to the high twenties. The new 2016 Kia Optima goes on sale later this year.