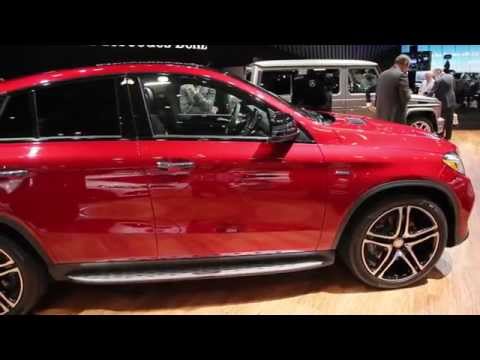 The Mercedes M-Class was the German automaker’s first American-made vehicle, and over three generations, it’s been a rousing sales success.

This year, the M-Class is no more. But there’s a good reason: it’s being renamed and updated while it adds a sleeker new version. This is the new 2016 Mercedes-Benz GLE-Class.

It’s a new name, but the GLE-Class is largely the same as last year’s SUV—that is, except for the new GLE Coupe, a new model Mercedes will build alongside the regular version in Alabama.  Across the board, all versions get more emphatic front-end styling, with a chunky grille and  sculpted fenders. The GLE Coupe isn’t really a coupe, but it does soften the roofline in the same way the BMW X5 becomes the X6.

Both the GLE and the Coupe get an updated interior with a new infotainment setup already in place in Mercedes’ sedans.

For performance, the GLE runs the table. There’s a turbodiesel four-cylinder with 201 horsepower, and a 0-60 time of less than 9 seconds. There’s also a plug-in hybrid with a V-6 and hybrid pack that net a total of 436 horsepower and up to 19 miles of electric-only driving. Full charging takes about two hours.

Most GLEs come with four-wheel drive, with a rear power bias in the AMG versions. With a towing package, the GLE can pull up to 7,700 pounds of trailer. All versions can be equipped with an air suspension and adaptive shocks, and adaptive driving controls push some versions into Sport+ territory—and others deeply into Offroad+ territory.

Inside, the GLE-Class’ accommodations haven’t changed much. The GLE has space for up to five people. They’ll all be safe and sound too—the mid-size SUV has enjoyed some of the best crash-test scores in its class.

Pricing and fuel-economy numbers won’t be out until summer, when the GLE goes on sale, but some new features like surround-view cameras, and parking assist have been confirmed. A new Night package blacks out trim and fits 20-inch black gloss wheels.

The new GLE-Class goes on sale in August, with the plug-in edition trailing by a few weeks.