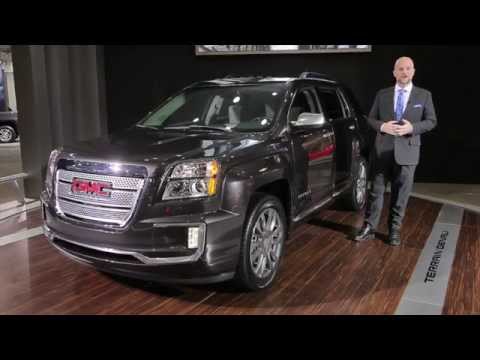 GMC’s known for its big and brawny trucks and SUVs, but its crossovers are booming too. The mid-size Terrain was new for 2010—and this year it’s getting a quick update before an all-new version comes along in a couple of years.

We took a first look at the 2016 Terrain at the New York Auto Show.

Most of the Terrain’s updates happen inside, but there are a few tweaks to its rugged look. There’s a new front end, and more chrome and LED details. The Denali model is back, too—you can spot it by its distinctive grille. The standard wheels are 18-inchers while the Denali comes standard with a 19-inch set.

Inside, all 2016 Terrains come with a revamped center console with more storage. Some models sport a new saddle leather treatment, a chrome-trimmed shifter, and eight-way power-adjustable seats.

New technology makes its way into the Terrain in the form of 4G LTE connectivity that enables a built-in Wi-Fi hotspot. There are also blind-spot monitors, a forward-collision system, and a lane-departure warning system.

No changes have been to the powertrains. That means a 2.4-liter four-cylinder, rated at 182 horsepower, is standard. For more power and especially, more towing capacity, there’s an optional V-6 with 301 horsepower and up to 3,500 pounds of pull.

Terrains come with a choice of front- or all-wheel drive, and all models come equipped with a six-speed automatic transmission.

Prices haven’t been announced yet, but the 2016 GMC Terrain goes on sale in the fall.