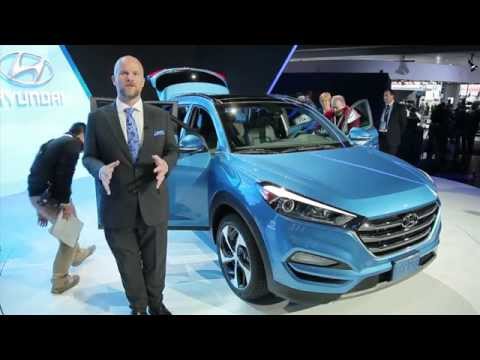 Here in America, we’re hitting peak crossover. It’s not enough to have one or two family-friendly SUVs—better to have three or four, and one of them better be small.

That’s been the job of the Hyundai Tucson since it was new in 2010. It’s the entry into Hyundai’s family of crossover SUVs—and it’s all new this year, with more efficient power and with a new look that fits perfectly alongside the bigger Santa Fe.

We took a first look at the new 2016 Hyundai Tucson at this year's New York Auto Show. It’s not difficult to pick out the new Tucson from the old one. The sculpted body looks like it’s been gone over with a clay-modeling knife. But there’s always the six-sided grille to remind you that it’s a Hyundai.

The new Tucson looks bigger than before, and it is: it's longer and wider than the 2015 model, and it rides on a longer wheelbase. That gives the new Tucson a roomier cabin than in last year's model, and that gives more space for people and their cargo. It’s more a direct competitor for the RAV4, CR-V and Escape in this new generation.

With the longer wheelbase, Hyundai promises a smoother ride. It’s also redesigned the suspension for better handling and steering feel.

For power, the Tucson drawn on one of two four-cylinders: a 2.0-liter with 160 horsepower, coupled to a six-speed automatic, and a turbocharged 1.6-liter with 175 horsepower, teamed with a new seven-speed dual-clutch transmission. Fuel economy could be as high as 26 miles per gallon combined. All-wheel drive is an option; it’s bundled with features like hill-start assist and downhill brake control.

Among the new features on the Tucson are a standard rearview camera and a touchscreen audio system. A navigation system is an option, as are a 405-watt audio system, a panoramic sunroof, and a power tailgate.

On the safety front, the Tucson can be outfitted with a forward-collision warning system and blind-spot monitors. Hyundai says it’s confident the Tucson will get top crash-test scores, but there’s no data yet.

Pricing hasn’t been announced, but the new 2016 Hyundai Tucson goes on sale later this year.