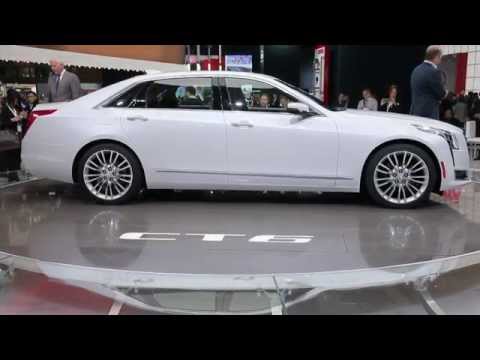 Cadillac has spent the past 15 years reclaiming its turf as one of the world’s most respected luxury brands. Until now, it’s left the story unfinished at the mid-size CTS. Now it’s time for the ultimate Cadillac—a full-size luxury sedan set to take on the Mercedes S-Class and BMW 7-Series.
This is the 2016 Cadillac CT6.
ALSO SEE: 2016 Lexus RX Video Preview
The CT6 may have a confusing name, but its credentials are clear. It’s a rear-wheel-drive car with an option for all-wheel drive—and it rides on a new platform that uses eleven different materials to cut weight. With lots of aluminum and high-strength steel, the CT6 is as big as a 7-Series—but weighs less than a 5-Series.
Even so, the CT6 is a handsome, imposing car, with a familiar Cadillac theme inside and out. It’s more than 200 inches long, with a wheelbase of about 122 inches—one third of which goes to rear-seat legroom. The cabin is spacious, and wears leather, wood, and carbon fiber.

When it goes on sale late this year, the CT6 will have a choice of three powertrains, all coupled to an eight-speed automatic. There’s a 265-horsepower four-cylinder; a 335-horsepower V-6; and a twin-turbo six with 400 hp, with a plug-in hybrid version yet to come.

For great handling like the smaller CTS and ATS, the CT6 gets an independent suspension and electric power steering, with magnetic shocks to control the ride. All-wheel drive is standard on the V-6-powered cars.
CHECK OUT: 2016 Chevy Malibu Video Preview

But where the CT6 might really make its case for luxury buyers is in the back seat. It’s a whole different world back here, with massaging and reclining rear seats, a rear infotainment package with 10-inch screens mounted in the front seatbacks, quad-zone climate control, and a Bose Panaray sound system with 34 speakers.

Other tech features include a traffic-crawling function, surround-view cameras, night vision, and a video-streaming rearview mirror for perfect visibility. Wireless phone charging and 4G data services are also part of the package.

No pricing has been announced, but the CT6 goes on sale late this year.