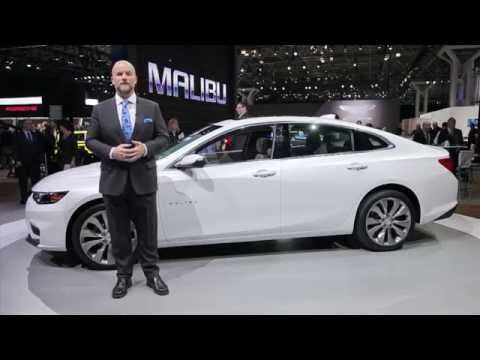 If you’re shopping for family sedans, we know a few good names. Legacy. Fusion. Accord. Well this year, Chevrolet wants a place on that list, too—it’s introducing a brand-new Malibu that it says could be the best mid-size car ever.

Well, is it? We take a look in this 2016 Chevrolet Malibu video preview from the 2015 New York Auto Show.

It’s easy to pick out the new Malibu in a crowd of current Malibus. Just look for the bigger, prettier car. Chevy knows the last car’s styling wasn’t competitive with cars like the Fusion and Mazda 6—but now it is. The Malibu now has a beautifully rounded look with a long roofline, slim headlamps, a nicely balanced pair of grilles, and lots of curves stamped into its doors, curves that remind us of waves.

Inside, there’s a much more streamlined dash, with room for a big touchscreen, and with much more attractive and appealing finishes, all around.

Green-car fans will be geeked by the Volt-based Malibu Hybrid. While other Malibus get up to 37 miles per gallon highway, the Hybrid pushes that number to 48 miles per gallon highway—up there with Camry and Accord hybrids. The Malibu doesn’t have an electric-only mode accessible to drivers, but it does have the ability to run on battery power alone at speeds of up to 55 mph.

Where the Malibu really overcomes the past model's shortcomings is in rear-seat space. It’s now one of the most comfortable back seats in the family-sedan set—that’s because it’s almost four inches longer than before. There’s plenty of storage space, too—like this Pop Tart-sized cellphone bin that can be fitted for wireless charging.

The Malibu’s been a strong safety performer in the past. This new one adds features like adaptive cruise control, forward-collision warnings with brake assist, even automatic parking assistance. Other features include wireless 4G data service, lots of USB ports, and a rearview camera standard on most models.

There’s no word on pricing, but the Malibu goes on sale late this year. Hybrids arrive next spring.