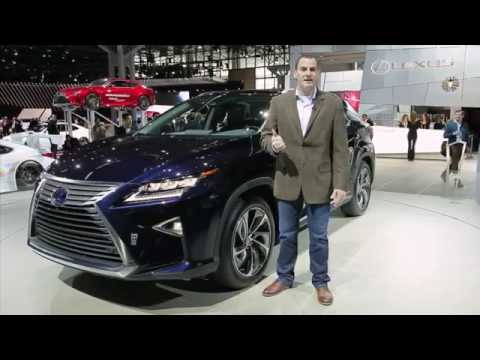 Back in 1990, Lexus launched with the world-beating LS sedan. Since then, it’s been the RX crossover SUV that’s kept the doors open and the buyers buying.

The new RX needed some more excitement, and it gets it this year in the form of a bolder look. The new RX adopts an hourglass-shaped grille, lots of LED lighting, and a C-pillar that’s partly blacked out—an effect that works exceptionally well on the Nissan Murano. Inside, there’s a more airy cabin, with an available panoramic roof, more streamlined controls, and space in the center of the dash for a 12.3-inch screen.

The RX remains a five-seater. It’s not at all wider or taller than before, but the wheelbase has been stretched by almost three inches, the body by about five. It’s extra space given mainly to back-seat passengers, and it makes getting in and out of that back seat almost as easy as in front. For cargo space, the rear seat folds down—now with power assist.

Again this year, the RX comes with a choice of conventional and hybrid models. The standard RX 350 gets a 300-horsepower V-6, with a new eight-speed automatic transmission for all models. RX 450h hybrids use a special Atkinson-cycle version of the V-6, coupled to Toyota’s Hybrid Synergy Drive. Fuel economy should improve from today’s 32-mile-per-gallon city rating.

Lexus says it’s retuned the softly sprung RX for better handling, while adding an adaptive suspension to the options list. There’s also an F Sport model that returns, this time with the adaptive shocks standard, a Sport+ mode for throttle and steering and transmission, and new 20-inch wheels.

Safety scores should remain good, even as Lexus adds more safety technology to the RX. Forward-collision warnings with automatic braking are new, as are lane-departure warnings and lane-keeping assistance. Adaptive cruise control, blind-spot monitors, and surround-view cameras are also new—as is a new rear-seat entertainment system with 11.6-inch screens at the back of the front headrests.

There’s no word on pricing yet, but the new RX goes on sale later this year. Stay tuned for our first drive.