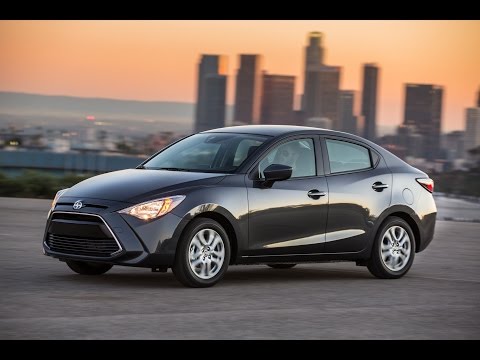 Scion is Toyota's youth brand, but its lineup's grown old over the past few years. It's finally time for a trio of new models Scion promised last year--and this one is the most practical. It's the new 2016 Scion iA sedan.

The first thing you’ll note is that the iA is the first sedan ever to sport the Scion badge, and only the second Scion to ever have a trunk--the first being the tC coupe.

If you’re looking at the iA and thinking it looks familiar, that’s because it is. The iA is a rebadged version of the Mazda 2 sedan, which we don’t get here in the U.S.

The curves and taillights might say Mazda, but that new front end says Scion with a hexagonal lower grille.

Inside it’s the same story. It feels familiar as it’s a retouched Mazda 2 interior. The cabin gets some distinctive touches, such as soft-touch trim and surfaces, chrome accents, and a telescoping steering wheel. It’ll also be versatile with 60/40 split-folding rear seats.

As with most Scions, value is part of the equation and there’s quite a bit of it here. There’s a long list of standard features including cruise control, power features, steering-wheel controls, and a seven-inch infotainment system with six speakers.

The iA is powered by a 106-horsepower 1.5-liter four-cylinder, which sends power to the front wheels through either a six-speed manual or six-speed automatic transmission. Scion says the iA will have an EPA rating of 33 mpg in the city and 42 mpg on the highway with a 37-mpg combined rating.

The iA has an impressive safety roster for a subcompact car with a standard low-speed pre-collision system. There’s also a standard rearview camera and Bluetooth.

The 2016 Scion iA will arrive in dealerships this fall with an estimated price tag of about $16,000.