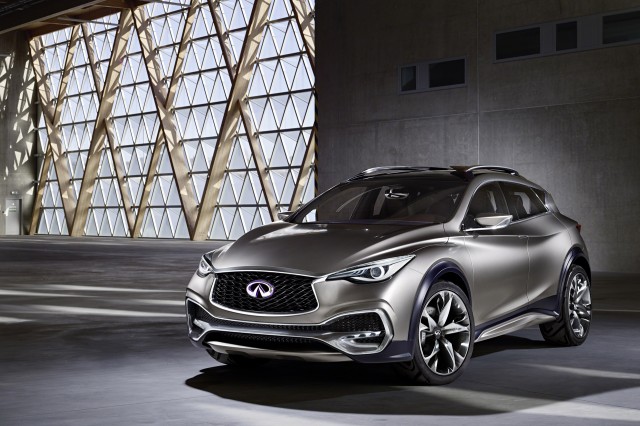 Infiniti is rapidly and dramatically remaking itself, and the upcoming 2017 QX30, as previewed by the QX30 Concept shown this week at the Geneva Motor Show, will be one of the harbingers of this sea change.

They’re important agents of youth, too, for a brand that’s taking better aim at Gen X and Gen Y, which will add up to about 80 percent of premium crossover buyers in this vehicle’s compact segment. Furthermore, Infiniti notes, these younger buyers’ idea of a premium car has more to do with design and execution—and less to do with size or power.

That’s exactly where Infiniti is aiming the QX30. Following up closely on the Q30 Concept (first shown at the 2013 Frankfurt Auto Show), the QX30 essentially takes that profile and form and ‘ruggedizes’ it, raising the ride height and applying different front, rear, roof, and lower-body design details—plus a more lavish interior treatment.

While it’s part of the same family as the Q30, which is still on the way in multiple body styles, including a sedan, the QX30 has essentially the same running gear and sheetmetal, but it rides about 1.2 inches higher than the Q30 (ground clearance is 7.6 inches), with skid plates underneath and rugged rubberized cladding around wheelwells and sills. Think of it as a Subaru XV Crosstrek for the luxury set.

The QX30 will also be powered by a 2.0-liter direct-injection turbocharged four-cylinder that’s Mercedes-Benz supplied and essentially the same unit that’s installed in the Mercedes-Benz CLA and GLA models.

At 174.3 inches long, 71.4 inches wide, and just under 60 inches high, the QX30 is within an inch or so all around compared to the Mercedes-Benz GLA-Class.

And even then, the similarities with those Mercedes models don’t completely end. The Infiniti and Mercedes-Benz also share some hard points for safety and body structure, although virtually 100 percent of body, sheetmetal, components—essentially everything but the powertrain—is engineered independently by Infiniti.

Concept’s profile and form “locked in” for production

Will the production 2017 Infiniti QX30 look like the concept? Very much so; on the outside, the QX30 is essentially “locked in,” an official told us, and while details will change, of course, it will have the same proportions as the concept—including the very expressively sculpted (and dramatically creased) 'dual wave' sheetmetal.

Infiniti describes the QX30’s design theme as “seductive ruggedness,” and it aims to provide an exterior that’s muscular and coupelike. “We wanted the spontaneous fluidity of the QX30 Concept design to cut through the urban clutter and rigidity, reflecting its go-anywhere and spur-of-the- moment nature,” said Infiniti design chief Alfonso Albaisa.

Brown is the prominent color for the interior, with the seats wrapped in Connolly saddle leather with contrasting blue stitching. In back, the seat frame itself is U-shaped, while the front seats have a ‘suspended’ design and the carpeting has a complementary leather-weave pattern with bright blue backing.

The five-door QX30 Concept has only four seats, with a full-length center console. While it’s set up that way to maximize the design expression in concept-car form, officials wouldn’t confirm if the production version would have this setup or a five-passenger layout.

The concept rides on huge 21-inch alloy wheels, so that will likely change, with smaller wheels on most models. Other features, such as the ‘suspended’ seating style and the extended, offset planar roof rack design—overlapping somewhat with the view out of the glass roof—are other items that aren’t as likely to show up in a production model.

The QX30 Concept, also, is said to be made of aluminum, while a mass-manufactured version would almost certainly be made of steel.

All of these models are likely to go over very well in Europe, where the Q50 sport sedan is considered quite large; and the Q30 and QX30 will at last give the brand a solid premium entry that fits in with the form factor already popular in the mass market.

But it’s also a very important model for North America. The QX30 concept also gives Infiniti an entry in a segment that thus far only has the Mercedes GLA, BMW X1, and Audi Q3. You can bet more rivals are on the way.

Hitting the market next year, against Q3, X1, and GLA

Both the Q30 and QX30 are slated to be produced at Nissan’s Sunderland, U.K. plant, where the Juke is assembled—on a separate Infiniti-dedicated assembly line—beginning this December. The models will reach the U.S. market by late summer next year, with the QX30 to follow closely.

While Infiniti hasn’t yet said anything about pricing, we’ll venture a guess that the QX35 will land squarely against the Mercedes GLA’s base price of $31,300; a fully optioned Mercedes-Benz GLA250 runs up to $55k, and although Infiniti is looking to add more personalization and a la carte options, the fully loaded price of the QX30 may be a bit less.

Infiniti sold about 117,000 vehicles in the U.S. in calendar year 2014. That’s slightly more than the previous year, but behind the brand’s peak sales years of 2003-2007. With the QX30 and Q30 on board, the brand will almost certainly push on to new records.

The Q30 and QX30 are just the beginning of the transformation. The brand has a total of six model introductions in the next 18 months including a total of nine model redesigns that are in the works over a somewhat longer time frame.

One of those next steps is the 2017 Infiniti Q60 Coupe. The brand also confirmed at Geneva that it will show the final production version of that model at next year’s Geneva Motor Show, and that it will go on sale shortly thereafter.