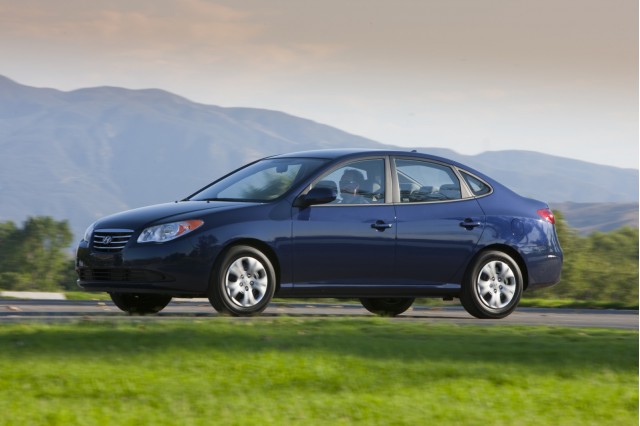 Hyundai has issued a recall for nearly 205,000 Elantra and Elantra Touring models registered in the U.S. According to the National Highway Traffic Safety Administration, some of those vehicles may lose power steering while they're in motion, increasing the risk of an accident.

The problem with the Elantra and Elantra Touring is linked to a faulty component manufactured by MOBIS, which is based in South Korea. In a Defect Notice Report, NHTSA says that:

The subject vehicles are equipped with electronic power steering (EPS)... There are three main inputs to the system’s [electronic control unit, or ECU]; steering wheel torque, steering wheel position (angle), and vehicle speed. Two LEDs are used to calculate torque applied to the steering wheel. If the ECU senses a discrepancy in the torque sensing circuitry, an indicator lamp is illuminated in the instrument cluster, a diagnostic code is stored, and steering assist is no longer provided. If the ignition key is cycled off and back on, steering assist is typically restored.

Until the car is turned off and back on, however, power steering will be disabled, making the vehicle much harder to control. That, in turn, will increase the risk of an accident.

Interestingly, it appears that Hyundai wasn't entirely sold on the idea of recalling vehicles for the loss of power steering. In a chronology of the problem, there's this curious paragraph:

Hyundai monitored the incoming data related to loss of power assist. Hyundai initially determined that the level of force necessary to steer a vehicle without EPS-assist remained within acceptable levels. This belief was centered on Hyundai’s compliance with European Standard ECE R-79, Uniform Provisions Concerning the Approval of Vehicles with Regard to Steering Equipment. ECE R-79 specifies the measurement of steering effort in the case of a power steering failure. Hyundai’s understanding has been that the loss of power steering assist has not, in the past, been considered as a safety related defect in the United States. This understanding was based on the fact that manual steering control is maintained.

Eventually Hyundai came around, though -- apparently because of peer pressure: " More recently, however, the industry has increasingly handled similar issues through safety recalls due to the greater driver effort at low vehicle speeds."

CHECK OUT: The Car Connection's Best SUVs To Buy 2015

And thus the recall, which affects the following models:

All told, the recall affects 204,768 vehicles registered in America.

Hyundai hasn't yet told NHTSA when it will mail recall notices to owners. When it does, though, owners will be able to take their vehicles to a Hyundai dealer, who will inspect the Electronic Power Steering system and update the EPS control unit software at no charge.